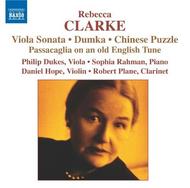 Rebecca Clarke was, by profession, a viola-player and enjoyed a successful early career in England. She wrote in particular for her own instrument, and interest in her work has grown, after earlier neglect, especially during the last thirty years.
Her compositions, some twenty in number, belong to the years before 1941, after which she wrote no more. Born and trained in England but of partly American parentage, she found herself in the United States at the beginning of the war and settled there, marrying and making her home in America for the rest of her long life.
The viola player on this recording is Philip Dukes, who in 1995 won the coveted European Rising Stars Award which led to recitals throughout Europe. The clarinettist Robert Plane has won much critical acclaim for his Naxos recordings.