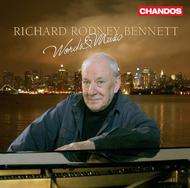 Among present-day musicians, there can be few more versatile than Sir Richard Rodney Bennett: composing for concerts and films, playing the piano in contemporary music and in jazz idioms as well as singing and playing classic show tunes in cabaret. In fact he ranks among the very best of the singer-pianists performing today and certainly earned his knighthood by the Queen for services to music.
Having regularly performed cabaret in the UK and US, normally accompanied by BBC Radio 3 Jazz Singer of the year, Claire Martin, this is the first disc of his cabaret performances as a solo artist, performing his own arrangements. The songs are beautifully sung and played, and with the recordings intimate quality really allows the songs to breathe. This is an inventive and charming selection of material from the golden age of American popular song, in which the titles reflect the vast knowledge and influence on Richard Rodney Bennett.
Claire Martin wrote on Rodney Bennett: He sings beautifully and he plays great piano, he has such a beautiful touch and really cool ideas. Plus he knows loads of great quirky songs
"What was important was to acknowledge that the finely crafted marriage of words and music that flourished in the thirties and forties  indeed the golden age of American popular song  simply arent period pieces, not when a Richard Rodney Bennett is around to pick them up, dust them off and allow their magic to start all over again." Glasgow Herald
Contents:
- It might as well be spring
- Dont sleep in the subway
- Get rid of Monday
- Someone to watch over me
- Angel eyes
- Spring can really hang you up the most
- Let me down easy
- I wont dance
- Killing time
- How long hasthis been going on?
- On second thought
- Early to bed
- Wake up, chillun wake up
- Goodbye for now
- Words and Music