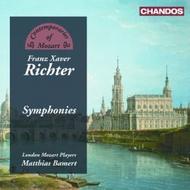 A new instalment in the popular Contemporaries of Mozart series conducted by Matthias Bamert with the London Mozart Players, including the premiere recording of three symphonies.
Franz Xaver Richter was the earliest of the composer-performers who made up what came to be known as the Mannheim school, but he stood apart from the others but enjoyed a reputation outside the Mannheim court. As a composer Richter was most prominent at Mannheim as a symphonist, very much demonstrated in this release, including three premiere recordings.
The Mannheim school was particularly well known for its control of dynamics and for executing the special effects written by the resident composers. However, Richter did not use the Mannheim dynamics as prolifically as others, instead he was strongly influenced by the new pre-Classical stylistic developments, and he adapted the Mannheim symphonic style with his own differentiated dynamics and instrumentation. His works from this period nevertheless include such conservative traits as fugal techniques, Baroque sequences and the frequent use of minor tonality.
Alongside his more conservative Viennese features he combined progressive Neapolitan elements which create extremely inspiring and tuneful symphonies which are a delight.
This programme provides an impressive example of his compositional spectrum. Included in the programme are premiere recordings of Symphony in D major, No.53, which has the feel of a concerto movement; Symphony in D minor, No.56, an earlier work with a feature of unison writing for the strings and chromatic inflexions; and Symphony in G minor, No.29 which demonstrates the influence of Fux and the grinding discord  worthy of Richters younger contemporary, the great composer of symphonies, Joseph Haydn.
This beautiful music from this Mannheim composer is sure to become a classic amongst the Contemporaries of
Mozart series.