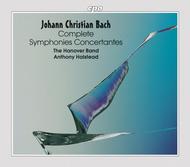 From the CPO edition devoted to the complete symphonic and concertante oeuvre of Johann Christian Bach, the youngest of Bachs sons, we have now brought together in a boxed set his complete Sinfonie Concertanti previously released on six single CDs at a special budget price.
J. C. Bach was a master in the genre of the sinfonia concertante. He bequeathed to posterity a total of seventeen such compositions for various instruments, and they number among his most highly imaginative works. This appealing genre of orchestral music featuring two or more solo instruments experienced its greatest flourishing for about sixty years in the eighteenth century, during the formative years of concert culture in the major European cities.
As in all CPOs J. C. Bach recordings, the Hanover Band under Anthony Halstead and various soloist performers fulfill their interpretive tasks with audible delight: J. C. Bachs music is unmistakable in its genial manner, in its shapeliness, its elegance, its euphony, its graceful logic. Anthony Halstead conducts sensibly and with good feeling for the natural tempos and their relation to the expressive nature of the music. The solo violinists play with polish and style..A promising start to a very worthwhile venture. Gramophone on Volume 1, 9993482