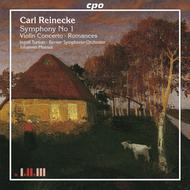 CPO has been championing Carl Reinicke for quite some time now, and the successful release of his Piano Quartets (9996182) has shown that this often underrated composer may have continued in the tradition of Mendelssohn, Schumann and Brahms, but was so much more than a mere imitator: Carl Reinickes music.is seriously underrated. It possesses the sweeping Romantic qualities of Schumann, a dazzling technical brilliance and a compelling self-confidence. BBC Music Magazine on 9996182
The works featured on this recording reinforce the ideal of Reinicke as a worthy composer in his own right.  The Symphony No 1 was not an instant favourite with the public and press at its première, but shortly afterwards was recognised as a fine work of musical art. In 1866 the well known music critic Eduard Hanslick described Reinickes musical talent as remarkable.
All four pieces on this disc are live world première recordings. They derive their special appeal from their melodically crisp themes and the interpretative artistry of violin soloist Ingolf Turban, praised on a previous recording by MusicWeb on his reading of charm and refinement.