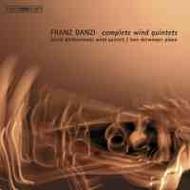 If the string quartet can claim Haydn as its father, the wind quintet has two  Anton Reicha and the slightly younger Franz Danzi. Between them they provided the new combination of wind ensemble with a large repertoire and set the mould for composers to come.
It was probably Danzis experiences as a conductor, chiefly at the Karlsruhe court theatre, which formed the basis of his fine understanding of wind instruments and of ensemble playing. This was recognised at the original release of these discs, when Gramophone's reviewer wrote that the music has great charm and polish, enhanced by the persuasive craftsmanship of its scoring.
But even more than the music, (described in Fanfare as pieces which could turn Mozart-lovers into lovers of Mozart-loving Danzi) it was the performances by the Berlin Philharmonic Wind Quintet and (in the three piano quintets) Love Derwinger that moved the reviewers to use superlatives. The French magazine Repértoire claimed that the interpretations were luminous: alternately flowing and spirited, dreamy and boisterous; of an exhilarating virtuosity, tinged with poetry and in full gala dress.
Complete Wind Quintets:
The Wind Quintets (Op. 56, 67 & 68)
The Quintets for Piano and Winds (Op. 41, 53 & 54)