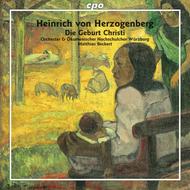 The most recent addition to CPOs quest to bring the little-known German composer Heinrich von Herzogenberg to the forefront of classical music awareness is this, his Christmas Oratorio.
Far more than just a Brahmsian imitator, Herzogenbergs Die Geburt Christi truly reveals his myriad skills for charismatic vocal writing.
The oratorio is for four-part choir, six soloists, harmonium, string ensemble and an oboe, and is based on the Bible, hymnbook texts, and Boehmes folk songs. The appearance of the one oboe in the third part, when the shepherds and children are hurrying to the manger, produces a moving poetic effect as well as a humorous one, so that the work undergoes an unexpected intensification beyond that normally induced by the appearance of Seraphim.