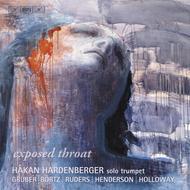 Simultaneously one of the superstars of classical music and an indefatigable ambassador of contemporary music, Håkan Hardenberger presents a recital for solo trumpet where much of the music has been written directly for him.
HK Gruber has previously collaborated with Hardenberger resulting in the highly regarded concerto Aerial. His Exposed Throat provides Hardenberger with the solo cadenza that the concerto lacks, as well as exploring the possibilities of creating polyphonic music for a single-voiced instrument.
In his comments about Painting, Daniel Börtz  like Gruber  refers to Bach's solo sonatas as an inspiration. Poul Ruders has taken the emblematic trumpet signals Reveille and Retreat as a starting point for his work, explaining that the two illustrate 'the nature of the trumpet, an instrument capable of glorious panache as well as sublime, inward-looking finesse'.
Robert Henderson's Variation Movements was composed in the 1960s, and has been hailed as 'a modern trumpet classic'. The Sonata by Robin Holloway, at its first try-out, proved to be 'a gruelling test of prowess', as the composer recounts, and had to be divided between three players! Holloway later made a more practical version for two trumpets, but Hardenberger here performs the original, which in the composer's words 'remains available as a challenge to the strong of lip, lungs and spirit'. Håkan Hardenberger is all of this, as he has proved before on BIS.