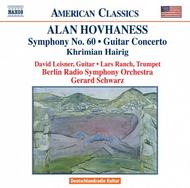 Of Armenian and Scottish extraction, the American composer Alan Hovhaness was a trend-setting pioneer who absorbed a variety of archaic and modern influences from East and West. He once said: My purpose is to create music, not for snobs, but for all people  music which is beautiful and healing.
Described by the composers wife as his true masterpiece, Khrimian Hairig, with its trumpet solo, recalls the heroic Armenian priest of the title. Hovhaness virtuoso and romantic Guitar Concerto was written for the Bolivian guitarist Juan Calderon. The Symphony No. 60 To the Appalachian Mountains, expresses the composers love of the music and folk poetry of the Appalachians.
This disc includes two world première recordings: the Guitar Concerto Op. 325 and the Symphony No. 60 Op 396.