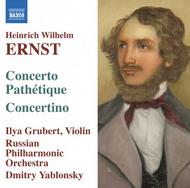 Heinrich Wilhelm Ernst was in his day considered by Joseph Joachim to be the greatest living violinist. He was compared favourably with Paganini, whose style he emulated and with whom he played in concert, and for most of his adult life he gave concerts all over Europe, playing his own and other virtuoso concertos and chamber music.
This new CD presents an appealing cross-section of Ernsts own music, and should certainly raise the profile of a violin genius whose name is now seldom heard. It is performed by the award-winning violinist Ilya Grubert, who plays a 1740 Guarnieri violin once owned by Henryk Wieniawski.
Gruberts previous Naxos collaboration with the Russian Philharmonic Orchestra and Dmitry Yablonsky won great critical acclaim: Ilya Grubert seems to me to give the most searching and sympathetic reading...spacious and measured performance, with Grubert sometimes romantically lingering over the phrasing...Grubert seems a thoughtful as well as bravura interpreter. Dmitry Yablonsky, whose recent Naxos disc of Miaskovsky symphonies I thought absolutely first rate, directs excellent orchestra support. BBC Music Magazine on 8557194