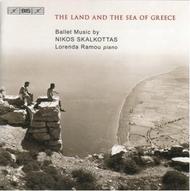 Nikos Skalkottas - The Land and the Sea of Greece :Ballet Music for Piano

This unique programme consists of ballet music by Nikos Skalkottas (1904-1949) written for the piano and, in some cases, later orchestrated by the composer. Pianist Lorenda Ramou, making her first disc for BIS, has searched the archives and private sources for these scores which were written in close collaboration with a number of choreographers in Athens during the last ten years of Skalkottas life.
This is the 16th title dedicated to the music of Skalkottas in the BIS catalogue, a pioneering recording project which has received high praise from the critics, especially for bringing out the various facets of this composer who worked within both tonal and serial traditions.
The orchestra version of The Maiden and Death (on BISCD1014) was described as drop-dead gorgeous by the reviewer on Classics Today.com, while Four Images and The Sea for orchestra (on BISCD1384), which together incorporate the movements of The Land and the Sea of Greece, are clearly descriptive and brilliantly orchestrated  here, then, is an opportunity to hear the works in their original piano versions, while expanding ones knowledge about a composer about whom a reviewer in Fanfare has written: Skalkottas may have an individual voice, but he speaks a universal language, and his discovery is a cause of rejoicing.
*All works except Echo are world première recordings