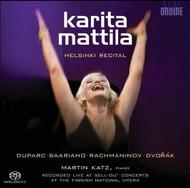 This SACD contains a rare recital performance of star soprano Karita Mattila in her native Finland. In front of an electrified audience, the best-selling Finnish artist in classical music performed in sold-out concerts at the Finnish National Opera in Helsinki in October 2006.
The centrepiece of the featured programme is the ecstatic song cycle Quatre Instants, a musical setting by Karita Mattila's compatriot, Kaija Saariaho, of poetry by Amin Maalouf. Described as 'a quasi-operatic monologue that plunges into the erotic, extreme territory that Mattila conveys so well', Quatre Instants was written for Mattila in 2002 and premièred by her in Paris and London to international acclaim.
Described by Musical America as "the most electrifying singing actress of our day, the kind of performer who renews an ageing art form and drives the public into frenzies", Karita Mattila is today's most exciting lyric dramatic soprano, and one of Ondine's key singing artists.
Concert Review:
"What an evening, what a show!" Helsinki Sanomat
(Saariaho): "A sensational recital by a sensational artist" The Guardian