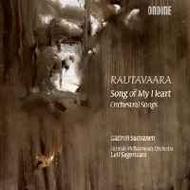 This first anthology of Rautavaara's orchestral songs will be welcomed by all fans of the Finnish cult composer's music, especially by those who love his successful operas: Rasputin (ODV4003), The House of the Sun (ODE10322D), Aleksis Kivi (ODE10002D), Vincent (ODE7502D) and Thomas (ODE 7042).
Rautavaara composed these Shakespeare and Rilke songs in his early twenties but revised them in more recent years when he reaffirmed his love of literature and poetry. His music also has a religious and metaphysical dimension which is manifest in the song cycle God's Way.
Swedish-Finnish baritone Gabriel Suovanen is the ideal interpreter of Rautavaara's songs, together with the Helsinki Philharmonic Orchestra and their conductor Leif Segerstam, who have a lengthy pedigree in their compatriot's music.
The booklet contains liner notes written by the composer himself, as well as the lyrics both in the original language and in English translation.