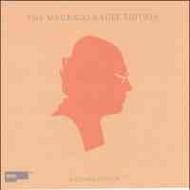 The year 1970, Beethoven returns to his home town, Bonn and his house in the year of his 200th birthday. A wondrous b/w 35mm film.
In celebration of the 75th birthday of the great contemporary composer, performer and film director, Mauricio Kagel, Winter & Winter publish in a special hard cover package three iconic, works produced for WDR, the German radio station which has been instrumental in the realisation of Kagel's works over the last fifty years.
Limited Edition.
CD I:
Pandorasbox, Tango alemán, Bestiarium
Kagel sings Tango, plays bandoneon and performs as a bird!
CD II:
Hörspiel, Ein Aufnahmezustand / Radiophonic Art
recording, manipulation and collage of sounds, music, conversation made in a radio studio with all the mics open
DVD: Ludwig van - A cinematic report directed by Mauricio Kagel