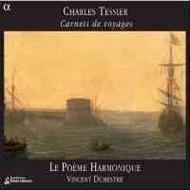 Alpha celebrates the 100th 'Ut Pictura Musica' series release with a recording of vocal and instrumental works by Charles Tessier, performed by Vincent Dumestre's ensemble Le Poème Harmonique, an outstanding ensemble nurtured by the label from the very first recording of Castaldi [Alpha 001].
The idea for the series was simple: to show the parallels that exist between music and painting. Each recording is accompanied by a painting with an explanation and analysis by Grenier. The painting and the music are set side-by-side and compared giving each recording a unique perspective.
But its not just the style of the CDs that marks them out as something special; its the way the idea of aristocratic exclusivity is manifested at every level. To begin with, the sounds are gorgeous, and connote an antique luxury  as do the paintings, reproduced often in detailed closeup, so we can revel in the sensuous surface of the paint. As for the composers themselves, they might have been chosen to embody the idea of aristocratic hauteur... The CD box-lining
has the same marbled appearance you find in old quartosized leather-bound books. . . in this small area of cultural life, its produced something marvellous. Alpha feature, The Daily Telegraph
Apart from sharing the same ensemble and conductor, Alpha 001 and Alpha 100 also have pictures by the same painter on the respective covers: Claude Gellée, known as Claude Lorrain (1602-1682). According to the eminent art historian Denis Grenier, Professor of art history at Laval University, Quebec, Lorrain can be considered "the most Italian of Lorrainers and the most Roman of Frenchmen"  Few artists have captured so marvellously the enchantment and intensity of sunlight; the brightness of the setting sun corresponds to the brilliance of early Baroque
music: that of Tessier here.
The works of the French lutenist and composer Charles Tessier give evidence of his vast curiosity and extensive
travels in the years around 1600. His first book of airs appeared in London in 1597 with a preface in Italian; the
title-page refers to him as a musician to Henri IV of France. A second volume, entitled 'Airs et villanelles français, italiens, espagnols, suices et turcqs ...' was published in 1604, dedicated to Moritz, Landgrave of Hesse. Tessier achieved a happy balance in his works between the different cultures of his time, with popular songs and refined airs de cour, a mixture of rusticity and delicacy that reflects the tastes of the court of Henri IV.
His Italian and Swiss villanelles, his Spanish and Turkish airs - echoed on this recording by pieces written by contemporaries John Dowland, Leo Hassler and Moritz of Hesse - show how men and their works travelled within Europe during the peace between the wars of religion and the Thirty Years' War.
With this recording Le Poème Harmonique and Vincent Dumestre invite us to take a look at the travels and the
encounters that enriched the joyful works of this unjustly under-rated composer.