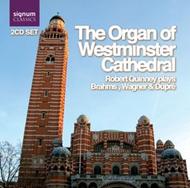 The Organ of Westminster Cathedral

For his first solo recording one of the new generation of English organists, Robert Quinney, performs the music of Brahms, Marcel Dupré and Wagner on the grand organ of Westminster Cathedral (Henry Willis III, 1922-32). The organ has, since its inception in the early 1920s, been closely associated with the French school of organist improviser-composers. This is due partly to the role played in the design of the instrument by Marcel Dupré, for fifty years the leading exponent of that school, and a frequent visitor to the cathedral's recital series.
Robert Quinney enjoys a growing reputation as a dynamic performer, whose repertoire stretches from the sixteenth century to the present day. Having studied at King's College, Cambridge, he served as Assistant Master of Music of Westminster Cathedral from 2000 to 2004. In 2002 he was named RCO Performer of the Year and has since been heard frequently as a solo recitalist. His playing has received critical acclaim on both sides of the Atlantic.
In addition to his work as a performing musician, Robert Quinney is also known as an authority on the music of J S Bach.
Recorded at Westminster Cathedral, London, 18 - 21 May 2004