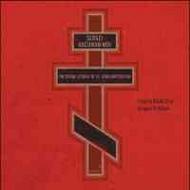 Rachmaninov's Liturgy of St John Chrysostom was composed in 1910 when, at the age of 37, he had just returned from his first American tour, having given a series of recitals in which his third piano concerto had been enthusiastically received.
Rachmaninov had always been fascinated by the melodic legacy of the Orthodox Church, and with the Liturgy of St John Chrysostom he penetrated the very heart of the spiritual world of Orthodox Russia, where its greatest desires and hopes for eternal life gleam.
In the world of choral music, the high standards reached in recent years by chamber choirs has been a hugely encouraging development. No longer are singers obsessed with having a solo career, instead they are more than happy contributing to the enrichment of a choral repertory which fully merits it, exemplified by ensembles such as Accentus, RIAS Kammerchor, Polyphony and Tenebrae.
The latest to join such an elite is the Vlaams Radio Koor from Belgium - the Flemish Radio Choir. Although the choir has been in existence for 70 years it is only in the last decade or so that its success has acted as a catalyst for amateur choirs in the Flanders region. On this occasion, and in sumptuous Glossa sound, they present an impressive version of the Liturgy of St John Chrysostom, a magical work, banned by the Bolsheviks as part of their fight against the Orthodox Church. This is sublimely inspiring music performed by an elite choir, with one of its regular guest conductors, the Latvian-born Kaspars Putninsh directing.
Recorded at Jezuïetenkerk, Heverlee, Belgium, in March 2006