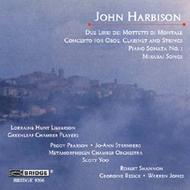 Bridge is pleased to be re-releasing the late Lorraine Hunt Lieberson's spectacular recording of John Harbison's poignant setting of Eugenio Montale poems of memory and loss, Due Libri dei Mottetti di Montale.
Originally released on the Archetype label, this work and Harbison's virtuosic Concerto for Oboe, Clarinet and Strings, will now be restored to the active catalog. One astute critic referred to the Concerto as "scenes from a marriage." This metaphorical marriage between solo winds and strings contains quarrels, precarious balances, comic relief, misunderstandings and eventual unanimity.
Combined with Harbison's Sonata No. 1 and his masterful and popular Mirabai Songs, as sung by Georgine Resick in the version with piano, this disc presents the first in an ongoing series of recordings dedicated to John Harbison's music. The Piano Sonata No. 1 was written for Robert Shannon, Ursula Oppens, and Alan Feinberg on a consortium commission from the National Endowment for the Arts. It bears the inscription "Roger Sessions In Memoriam." Dedicatee Robert Shannon gives the score a brilliant and transparent reading.