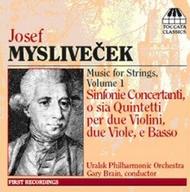 Myslivecek - Music for Strings Volume I

Concertanti Symphonies (6), or both quintets for two violins, two violas, and bass

Concertanti Symphonies (6), or both quintets for two violins, two violas, and bass

Josef Mysliveèek, although still little known outside the Czech Republic, was one of the chief architects of the high Classical style that emerged in Europe in the late 18th century.
In 1770 he met 14 year-old Wolfgang Mozart, who was much influenced by Mysliveèeks Italianate style  an aspect of Mozarts music the scholars have consistently overlooked.
The works on this CD, composed in Italy in the mid-1760s, are performed here as string symphonies following an option specified in the original print; they evoke the same qualities of grace, passion and tenderness that Mozart so much admired in Mysliveèeks operas and instrumental music. (They are also the earliest quintets for two violins, two violas, and cello ever published.)