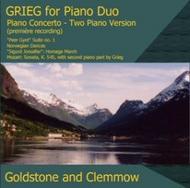 Grieg was the crucial figure in nineteenth century Norwegian music. This release contains some fascinating and rare pieces including a world première recording of the Piano Concerto. Here, the second piano part takes the place of the orchestra and is partly by Grieg and partly by Károly (Carl) Thern, the Austro-Hungarian composer and first published in 1876.
The Peer Gynt Suites were re-arranged by Grieg for piano (four hands and solo) in 1877-8 and 1890-2, Suite No. 1 has remained the most popular of the two. Mozarts Sonata K. 545 (sometimes referred to as Sonata Facile), was adapted by Grieg in 1877, without modifying Mozarts original notes, but adding indications of dynamics and articulation. The Norwegian Dances were written in 1882 for piano duet.
With over thirty CDs to their name and a busy concert schedule, the British piano duo Goldstone and Clemmow is firmly established as a leading force, described by Gramophone as a dazzling husband and wife team, and by International Record Review as a British institution in the best sense of the word. Their live concerts are a refreshingly presented mix of famous masterpieces and fascinating rarities. They have made numerous BBC broadcasts and have consistently presented first hearings of unjustly neglected works.