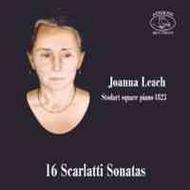 Scarlatti had a highly successful career as a composer, organist, harpsichordist and music teacher (particularly of the Portuguese princess Maria Barbara, who later became Queen of Spain). The majority of his 550 keyboard sonatas, all single movement works, were written for Maria Barbara. Most were written for the harpsichord, but Scarlatti may have also had the forte piano in mind for some.
The sonatas featured on this recording demonstrate Scarlattis very varied and innovative compositional styles and all have numerous technical challenges.
The instrument used is a Stodart square piano of 1823. This brings its own completely different range of colours and voices to the music, with a vibrant tone and wide dynamic range, typical of the pianos of the early 1800s. This style of piano was essentially a domestic instrument, suited to the drawing room. It has subtle reminders of the harpsichord timbre, and indeed it is possible to hear echoes of the guitar-like tones that must have inspired some of Scarlattis work.
Joanna Leach studied piano with Joseph Dichler in Vienna in the 1950s and later in London with Peter Katin. She became interested in square pianos in the 1980s, and together with restorer Andrew Lancaster, has developed her passion for performing the works of classical and early romantic composers on original period instruments.