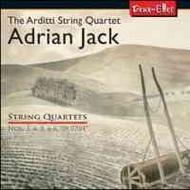 The Arditti Quartet enjoys a world-wide reputation for their spirited and technically refined interpretations of contemporary and earlier 20th century music. Several hundred string quartets and other chamber works have been written for the ensemble since its foundation by first violinist Irvine Arditti in 1974. These works have left a permanent mark on 20th century repertoire and have given the Arditti Quartet a firm place in music history.   The ensemble believes that close collaboration with composers is vital to the process of interpreting modern music and therefore attempts to work with every composer it plays.
Adrian Jack was born on 16 March, 1943, and began composing, with a short set of variations for piano inspired by Beethoven, when he was thirteen. He studied piano, composition and organ at the Royal College of Music and went on to study composition and electronic music at the State High School of Music in Warsaw. On returning to London he ventured into music journalist and lecturing at the Royal College of Music. Adrian was also director of an influential series called MusICA at Londons Institute of Contemporary Arts, which show-cased present-day music. Apart from six string quartets, Adrian Jack has written music for various combinations of instruments, three piano trios and many pieces for piano, piano duo and organ. A good deal of his music has been broadcast by BBC Radio 3.
Ever since Haydn established the medium of the string quartet, it has inspired composers to confide to it some of their most intimate and serious thoughts and feelings. The existence of players like the Arditti Quartet ensures that its repertoire continues to grow. These are two reasons  one a challenge, the other a possibility - why I have written six quartets to date, says Adrian Jack.