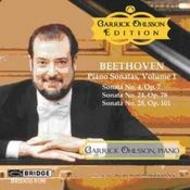 This is the second of a series of Garrick Ohlsson Beethoven Sonata discs as part of Bridge's new Garrick Ohlsson Edition.
Beethoven Sonatas, Vol. 2 includes an early sonata, and two of Beethovens finest later sonatas. The C-minor Sonata, Op. 111 was Beethovens last piano sonata, and as annotator Harris Goldsmith writes, it is a composition that presents stormy elements tempered by an Olympian reserve.
The popular Op. 81A Sonata Lebewohl was to have been a memento of the composers emotions when his pupil and loyal friend, Archduke Rudolphe, was forced to flee Austria in May of 1809 as the French besieged Vienna. The sonata was completed the following year, after the royal family was able to return. The Op. 2, No. 2 Sonata was dedicated to Beethovens teacher, Josef Haydn, and was composed in 1795-96. Though it is an early work, it is hardly an immature one, bearing many of the developmental procedures that distinguished Beethovens art from that of his contemporaries. Garrick Ohlssons readings are full of the virtuosity and passion that have marked his live performances of these works.
Garrick Ohlsson is widely regarded as one of the great virtuosi currently performing on the international concert stage. With an active repertoire of more than 80 concertos, a full schedule of solo recitals and chamber music engagements, Mr. Ohlsson's brilliant music making has graced the world's concert halls ever since he won the 1970 Chopin International Piano Competition.
. . . I doubt whether I shall ever be as impressed by any future performances as I have been by the ones on the first two of a planned complete cycle by the American Garrick Ohlsson.  Michael Tanner - BBC Music Magazine klisting 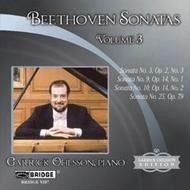 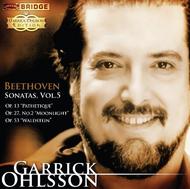 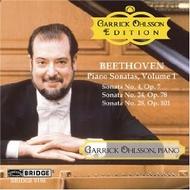 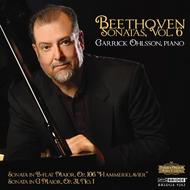 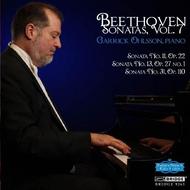