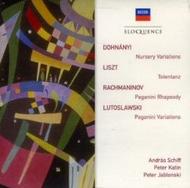 Variations on a Nursery Theme, op.25

Variations on a Theme by Paganini

Variations on a Nursery Theme, op.25

Variations on a Theme by Paganini

Four sets of 19th/20th century variations for piano are presented on this disc, starting with Dohnanyi's mock serious Nursery Variations (in a Schiff/Solti recording long out of print) and concluding with the 20-year-old Peter Jablonski's fantastic reading in the rarely recorded piano-and-orchestra version of the Lutoslawski Paganini Variations.
'Jablonski, whose credentials include having been voted best jazz drummer in Sweden at the age of seven (!), revels in its high jinks, and Ashkenazy and the orchestra just manage to hang on to his coat-tails... an exciting end to an admirably played and recorded disc' Gramophone
Also taken from that (now deleted) CD is another set of variations based on Paganini's 24th Caprice, the Paganini Rhapsody of Rachmaninov. Again Gramophone was full of praise for Jablonski's 'singing tone' and musicianly qualities, concluding that 'Decca's superb recording help to make this one of the more satisfying accounts on record'.
The remaining piece, Liszt's set of variations on the Dies Irae entitled Totentanz (Dance of Death) receives its first general release on CD from a 1950s performance with Peter Katin with Jean Martinon wielding the baton.
Artists:
Rachmaninov - Paganini Rhapsody
Peter Jablonski, piano; Royal Philharmonic Orchestra / Vladimir Ashkenazy
Dohnanyi - Nursery Variations
Andras Schiff, piano; Chicago Symphony Orchestra / Sir Georg Solti
Liszt - Totentanz
Peter Katin, piano; London Philharmonic Orchestra / Jean Martinon
Lutoslawski - Paganini Rhapsody
Peter Jablonski, piano; Royal Philharmonic Orchestra / Vladimir Ashkenazy