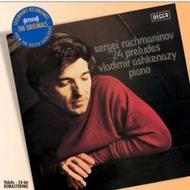 The music of Sergei Rachmaninov has been central to Vladimir Ashkenazy's repertory both as a pianist and a conductor, and it was with his first recording of Rachmaninov's mighty Third Piano Concerto (with the London Symphony Orchestra and Anatole Fistoulari) that he began his exclusive association as a pianist with Decca in March 1963.
Ashkenazy has recorded two complete cycles of the Rachmaninov Concertos and most of the composer's solo piano works including the Etudes-Tableaux, Second Sonata (Original version), the works for two pianos (with André Previn) and piano duet (with Vovka Ashkenazy) and a selection of transcriptions. As conductor, Ashkenazy has made highly-acclaimed recordings of Rachmaninov's Symphonies and The Isle of the Dead, Symphonic Dances and The Bells. Ashkenazy's recording of the complete Preludes first appeared in 1976 and was very warmly received:
'Perhaps what strikes home most of all is the sheer aristocracy of his playing ... everything is beautifully moulded and proportioned, beautifully balanced and blended. The sonority he draws from the instrument is poetry itself, as for instance the liquid stream of Op.23 nos.8 & 9. His effortlessly strong, brilliant technique is of course an enormous asset in bolder challenges like Op.23 no.2 ... at all times his phrasing suggests acute susceptibility, yet sentiment never degenerates into sentimentality and nothing would have pleased Rachmanimnov more than that. The C sharp minor Prelude is so often murdered that it is a revelation to hear it done with such a fine blend of the imperious and the mysterious; it emerges here as a little masterpiece' - Gramophone February 1976
Timing: 80:34
Digital Status: ADD
Recorded: All Saints Church, Petersham, January 1974-April 1975