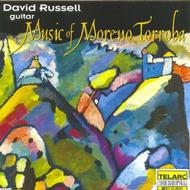 Classical guitarist David Russell, born in Glasgow, Scotland, has been hailed by the New York Times as "a talent of extraordinary dimension." Russell has won nearly all of the major international guitar competitions including the Andres Segovia Competition and the prestigious Francisco Tarrega Competition in Benicasim. Telarc's first recording with Russell featured the music of Paraguayan composer Agustin Barrios (CD80373) which was released in 1995.
Federico Moreno Torroba (1891-1982) was still at the beginning of his career as a composer and conductor when he was asked by renowned guitarist Andres Segovia to collaborate on creating a modern concert repertory for the guitar. Torroba also composed operas (including El Poeta, created in 1980 for Placido Domingo) and many examples of the Spanish theatrical form zarzuela, of which the most successful was Luisa Fernanda in 1932. His works for guitar place him among the twentieth century's leading composers for the instrument. With close to one hundred guitar compositions, he created most of them as short, dance-like numbers or character pieces, with the exception of the Sonatina (1965) and his works for guitar and orchestra.
Track listing:
1. Sonatina: I. Allegretto
2. II. Andante
3. III. Allegro
4. Burgalesa
5. Suite Castellana: I. Fandango
6. II. Arada
7. III. Danza
8. Madronos
9. Castillos de Espana: I. Alcazar de Segovia
10. II. Alba de Tormes
11. III. Montemayor
12. IV. Zafra
13. V. Manzanares del Real
14. VI. Siguenza
15. VII. Simancas
16. VIII. Turegano
17. IX. Torrija
18. X. Calatrava
19. XI. Redaba
20. XII. Alcaniz
21. XIII. Javier
22. XIV. Olite
23. Nocturno
24. Aires De La Mancha: I. Jerigonza
25. II. Ya llega el invierno
26. Coplilla
27. La Pastora
28. Seguidilla