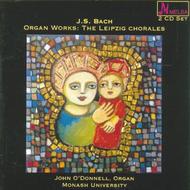 The program assembled on these two discs presents many facets of Bachs genius as an organist: Bach the virtuoso, Bach the Lutheran, developing the hymn melodies of his day into polyphonic gems for the organ, and Bach the supreme Baroque musical architect.
John ODonnell, University Organist, Monash University, is regarded as a Bach authority and an internationally renowned keyboard artist, choral conductor and musicologist. Born in Sydney, he graduated as Student of the Year from the Sydney Conservatorium of Music in 1966 and became Durham Universitys youngest Bachelor of Music in 1968. During 1969 he gained the Associate, Choirmaster and Fellowship Diplomas and Limpus Prize from the Royal College of Organists and won first prize in Englands first National Organ Competition. In 1971 he completed the Archbishop of Canterburys Diploma in Church Music. He also has the distinction of being the first person ever to perform Bachs complete keyboard works in public.
The 1980 Ahrend organ in the Robert Blackwood Concert Hall, Monash University, Melbourne, is recognised internationally as one of the worlds finest. Its builder, Jürgen Ahrend, is regarded as the most important organ builder of the 20th century.
"Thanks to the Ahrend organ's colours and O'Donnell's imaginative stop-pulling, the variety is immense. There are the blazing full-organ numbers...gentle fluty fantasias where the chorale tunes emerge with piquant nasal clarity...and sprightly trios in the instrumental style of the day." Sydney Morning Herald, Peter McCallum