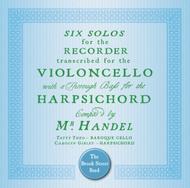 Handel Cello Sonatas? As Handel didnt write any, that may raise a few eyebrows. Then again, period-instrument ensemble The Brook Street Band have been doing just that since their debut recording of Handels Oxford Water Music (AV 0028), a chamber version of the orchestral evergreen, which earned the all-girl baroque band a Gramophone Editors Choice.
Tapping into the ubiquitous 18th-century technique of recycling tunes by transposing or arranging for different instruments, The Brook Street Band  named after Handels London address  here take the set of recorder sonatas variously known as Op. 1, assigning the solo line to the cello, an instrument which with Handel had obvious affinity. The Brook Street Bands second disc, Handels Op. 5 Trio Sonatas, became a favourite on Classic fM. This, their third release, is bound to be equally acclaimed and popular in equal measure.
The Brook Street Band are a lively ensemble of period instrumentalists, always stylish, occasionally daring in their expressive response to this glorious music.  The Sunday Times
So infectious is the enthusiasm of these gifted players for their Baroque master that you will find it hard to suppress a smile at the sheer energy and effervescence that bounce out of this disc  The Observer
delightful freshness  its very clear that they are enjoying themselves  Their pleasure in the music is infectious.  Gramophone Editors Choice