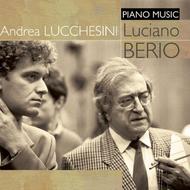 Andrea Lucchesini, associated as no other with the piano works of Luciano Berio, presents the most comprehensive collection of the great Italian composers solo keyboard oeuvre, including the seminal Sequenza IV, the monumental Sonata, and two works written specially for him.
Berio first heard Lucchesini in the 1980s and, captivated by his pure pianism, asked him to perform his Concerto II at the Proms in London. From that point their association flourished, Lucchesini continued to add Berios works to his repertoire, and gave the world-premiere of the Sonata in 2001. Working relationship turned to friendship and on the occasion of Luccesinis marriage, Berio presented to him and his wife Valentina Touch, a divertimento for piano four hands. On the same occasion Berio offered another duet as a gift to Valentinas parents, Canzonetta. Valentina joins her husband in both works on this CD.
The comprehensiveness of this album is complemented by the booklet annotation, including a personal note by Lucchesini, a note by Berio on his Sonata, a note by the Sonatas dedicatee Reinhold Brinkmann, and a note of appreciation by Berios widow, Talia. All in all, a unique document of an exceptional collaboration and remarkable friendship.
Andrea Lucchesinis account of Berios Piano Sonata  conjures up some dusky, mesmerising effects and calls for a virtuosity which Lucchesini provided. He wove rich textures around the repeated note which binds the whole piece together so insistently.  The Times
Recorded 30 & 31 October, 1 November 2004, Montevarchi (Firenze)