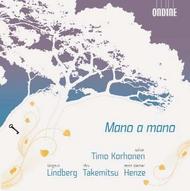 Magnus Lindberg (b. 1958) is one of the leading composers of his generation. Best known for his orchestral works, Lindberg has been writing chamber music for the guitar ever since the beginning of his career.

Mano a mano (2004) is Lindberg's first piece for solo guitar and a major contribution to the contemporary guitar repertoire. Although there are no tango influences in the work, the title is a quote from Carlos Gardel, a master of Argentinean tango whose music and interpretations are greatly admired by both Lindberg and Timo Korhonen. Mano a mano is a powerful tribute to human life and its numerous manifestations, "a hedonistic feast of constant playing with sounds and sonorities" said the Helsinki press. It is a rejuvenating and optimistic work.

Takemitsu's In the Woods (1995) remained his last work for his favourite instrument, the guitar. Its three movements are dedicated to guitarists with whom he had collaborated during his career: Wainscot Pond, after a painting by Cornelia Foss is dedicated to John Williams, Rosedale to Kyoshi Shomura and Muir Woods to Julian Bream. Henze's Royal Winter Music was also written for Julian Bream.

Timo Korhonen is one of the most versatile proponents of his instrument in the world. He has performed in more than 30 countries, at venues in Berlin, London,Vienna, Paris,Tokyo, Chicago, Madrid, Buenos Aires, Havana and Los Angeles, and at the Schleswig-Holstein Music Festival, among others. His recordings have been acclaimed by critics and have received several awards.