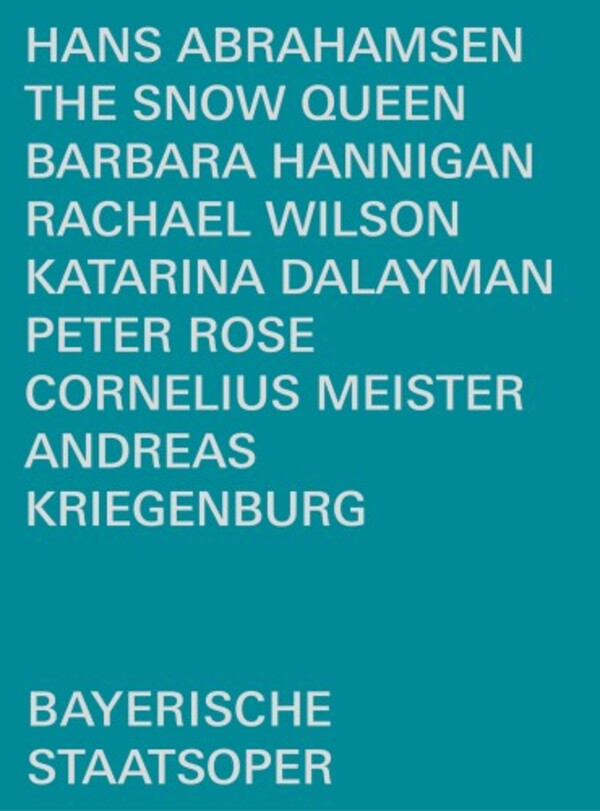 The Snow Queen is Hans Abrahamsens first opera, composed to a self-penned libretto, based on Hans Christian Andersens eponymous fairy tale. Following an in-depth study of the topic of snow and a life-long obsession with Andersens fairy tales, Abrahamsen composed the opera between 2014 and 2018. The plot follows that of the well-known fairy tale: Two children, Gerda und Kay, are extremely close and seemingly made for one another. Something pierces Kay in the heart and eye, causing the two to become emotionally distant, as if living in two different worlds. Kidnapped by the Snow Queen, Kay then vanishes from Gerdas life physically as well. She begins a long search for her friend until she finds him again in the midst of snow and ice. As Gerda weeps, her tears extract the demonic splinters from Kays heart. Having learned valuable lessons from these many experiences, the two friends are now ready to become adults.

Hans Abrahamsens music, with its smooth transitions and subtly modified repeats, lends the lyrics both depth and lightness. He is keen to point out the range of avenues for interpretation available. Its possible to read the fairy tale in a variety of ways. It contains many mysteries which are open to numerous interpretations. Accompanying Barbara Hannigan is a top-class ensemble of singers, including Peter Rose, Katarina Dalayman and Rachael Wilson. Cornelius Meister is the musical director, currently general music director at the Staatsoper Stuttgart. Director Andreas Kriegenburgs production of The Snow Queen is a touching story by adults, for an adult audience, offering a journey into the innermost regions of the human soul. Recorded during the premiere run in the presence of the composer and in close collaboration with him, this release captures an important work of new musical theatre.