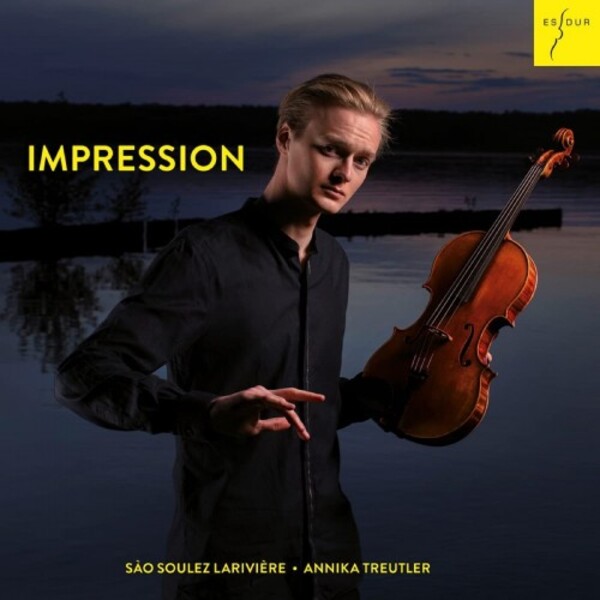 Concert Piece for viola and piano

A Bird Came Down the Walk

Concert Piece for viola and piano

A Bird Came Down the Walk

Fascinated by the extensive links between music, art and literature, French-Dutch violist Sào Soulez Larivière explores the influences and commonalities of these different art forms with his debut album.

In doing so, the Paris-born musician draws inspiration from one of his favourite paintings: Claude Monet's "Impression, soleil levant". Originally titled "View of Le Havre", this certain location seemed so unrecognisable that Monet was urged to change the title, to which he responded: "Mettez 'Impression'" (put 'Impression'), thus unwittingly giving birth to a new art movement. Whether it be Rebecca Clarke, Paul Hindemith, Claude Debussy, George Enescu or Toru Takemitsu - all share the language of impressionism and filter the perception of the world through their personal depictions, memories and emotions. This evocation without direct reference to reality is the element that connects the works on Sào's debut album, recorded with the Hamburg label ES-DUR. Accompanied by pianist Annika Treutler, the 22-year-old explores the boundaries of the viola's repertoire and, with Debussy's Sonata for Violoncello and Piano, also transcribes a piece not originally written for the instrument.

"The meaning of 'Impression' for me is the particular search to express the ineffable," describes Sào about his concept, which he was able to realise as a debut album as part of winning the Fanny Mendelssohn Förderpreis 2021. "Just as an impressionist painting invites you to take a step back and appreciate the work in its full depiction, I would like to invite my listeners to consider this album as a whole and discover the mood and atmospheres created by these amazing composers."

Sào Soulez Larivière originally started playing the violin, and was awarded a scholarship to study at the Yehudi Menuhin School in England. Having discovered the viola whilst playing chamber and orchestral music there, he decided to fully devote himself to the instrument in 2016. Currently in demand as both a soloist and chamber musician, the talented young musician lives in Berlin and studies at the Hochschule für Musik 'Hanns Eisler' with Professor Tabea Zimmermann, who nominated him for the prestigious award as patron of the Fanny Mendelssohn Forderpreis.

Sào Soulez Larivière is the seventh winner of the Fanny Mendelssohn Förderpreis, which was founded by Heide Schwarzweller as a private initiative. The concept award aims to support young classical musicians in realising their own ideas and visions. It is not about the pure technical virtuosity of the musicians, but much more about their innovative concepts and their visionary design. Selected by a renowned jury, every year since 2014 one award winner has been given the chance to develop his or her repertoire from the winning concept and then produce his or her debut album.

The Many Faces of God