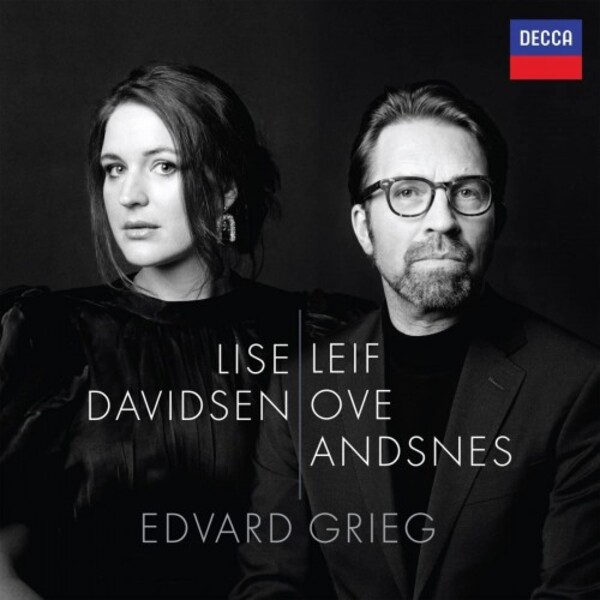 Two of Norways most celebrated musicians come together to perform the music of the countrys most celebrated composer. Lise Davidsen and pianist Leif Ove Andsnes will be touring the repertoire around Norway, Germany, Spain, Austria and the UK. Recorded in the Arctic Circle in Bodø  Lise describes magical time recording this music with a special team in rural Norway.

To date, most of Norwegian soprano Lise Davidsens recordings have been in the operatic or orchestral song repertoire. For her latest release on Decca, however, she teams up with her compatriot, the acclaimed pianist Leif Ove Andsnes, for a generously filled disc of songs by the greatest of all Norwegian composers. Edvard Grieg is best known to international audiences for his ubiquitous Piano Concerto in A minor, and for his incidental music to Henrik Ibsens drama Peer Gynt. Yet he was essentially a miniaturist, as his ten volumes of Lyric Pieces and his many song settings amply testify. Thanks to the particular demands of their texts, the latter are too seldom heard outside of Scandinavia, though previous recordings by Anne Sofie von Otter and (in a complete survey on BIS) Monica Groop have undoubtedly raised their profile in recent years.

This new album will boost their profile still further: Davidsen and Andsnes are artistically speaking a marriage made in heaven, and their understanding of the texts in their native language brings rich dividends throughout. Describing the heroine of the opening song cycle, Haugtussa (The Mountain Maid), op.67, booklet note author Andrew Mellor writes that Nature is Veslemøys mother tongue. Well, the feeling one gets in both this, Scandinavias greatest song cycle, and the disc as a whole is of musicians revelling in their mother tongue (linguistic and musical)  something one cannot always take for granted from native performers.

Just listen to the commanding way in which Davidsen launches into the open lines of Haugtussa, after the piano has scattered its fairy dust, and the ease with which she slips between declamatory and descriptive modes, Andsness accompaniment providing elegant shading. Or again, to the way she obviously relishes the sounds of Arne Garborgs Landsmål texts in Bilberry Slopes, an infectious feeling that characterises the piano playing too. In the closing song, the exquisite At the Gjætle Brook, Andsnes weaves a magical shimmering of sound, matched by Davidsen in the quiet poise of her closing lines.

With its symmetrical design, wide range of emotions (the central Meeting is meltingly beautiful) and clear echoes of Schubert and Schumann alongside intimations of Impressionism, Haugtussa will be the main attraction here for many. Not least thats because it so fully demonstrates Davidsens extraordinary vocal range, with a rich mezzo register (she started her voice training as a mezzo-soprano), brilliant top notes, and the ability to switch with such youthful freshness from one emotion to another, often within the space of just a few notes (although, crucially, nothing feels in the least contrived).

Yet the other items are by no means overshadowed by this dazzling opening. They include two further complete sets of songs: the Five Poems, op.69, to texts by Otto Benzon, with the intense emotion of its central, heartfelt At Mothers Grave highlighted by the lighter settings either side of it, To My Son and the charming Snail, Snail! whose piano figuration suggesting the twirls of the snails shell; and the Six Lieder, op.48, setting German texts by (among others) Goethe, Heine and the medieval Minnesänger Walther von der Vogelweide, another marvellously contrasted collection of pieces.

Excerpted from several other collections ranging throughout Griegs early and middle years, the remaining songs include the raptly gorgeous A Swan, illustrating the special relationship between Grieg and Ibsen; the splendidly exuberant Midsummer Eve; and two texts entitled To Her by John Paulsen, in settings which exude deep intimacy and affection, as well as some wonderful harmonic and timbral inflections. Hans Christian Andersens I Love but Thee and two famously enchanting settings of A.O. Vinje, In the Hills and the concluding Last Spring, set the seal on this utterly transporting album. Vividly recorded at the Stormen Konserthus, Bodø in Nordland county (just north of the Arctic Circle) in early September 2021, this is Lise Davidsens most personal disc yet. Enriched by Andsness matchlessly sensitive playing, its a sure-fire hit.

... it's a pleasure to hear Lise Davidsen in more intimate surroundings in her third album for Decca, and in repertoire that could hardly be closer to her heart. ... freshness is one of the characteristics that shines most compellingly throughout this generous 80-minute selection. ... Andsnes's role cannot be overestimated either. His playing is supremely refined and sensitive... Decca's eingineering is superb, capturing the full range and magnificence of Davidsen's voice alongside Andsnes's exceptional playing. An outstanding release.  Hugo Shirley (Recording of the Month)
Gramophone January 2022