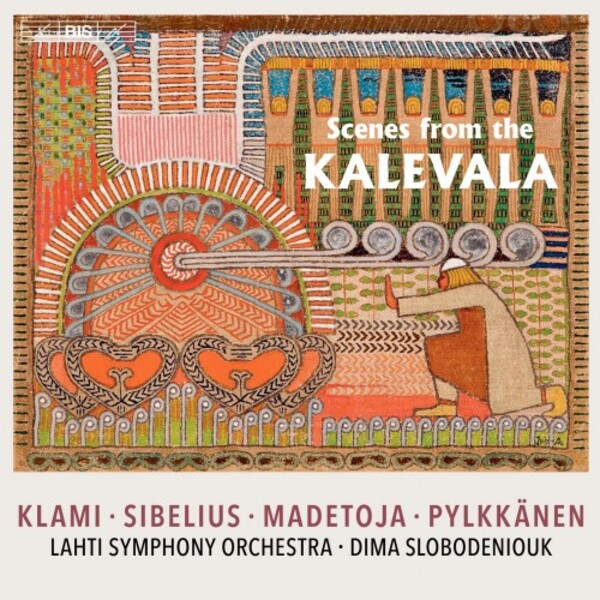 The Kalevala is a compilation of mostly original folk poetry, arranged into fifty extensive runos (poems) by the Finnish physician and folklorist Elias Lönnrot. Beginning with the creation of the world, it develops into a series of separate episodes which nevertheless form a rich whole, introducing epic characters such as Väinämöinen, Lemminkäinen and Kullervo. The collection first appeared in 1835, with a final, extended version being published in 1849, and was soon hailed as Finlands national epos  a sensitive matter given that the country had been subjected to Russian rule since 1809. It came to play a major part in Finlands national awakening and had a massive influence on Finnish art in the late 19th century, but its role in the national consciousness remains important even today.

The present album, from the Lahti Symphony Orchestra and Dima Slobodeniouk, brings together Kalevala-related works spanning the period between 1897 and 1943. No such collection could overlook Sibelius, who composed several works inspired by the epos. Included here is a rarity  the first recording of the 1897 version of Lemminkäinen in Tuonela, from the Lemminkäinen Suite. Finnish composers from later generations all had to find a way out from under Sibeliuss shadow  especially so when composing works based on the Kalevala. The portraits of Kullervo which bookend the disc, by Leevi Madetoja and Tauno Pylkkänen, are both compact works in contrast to Sibeliuss large-scale choral symphony on the same theme, and when Uuno Klami used bold and primitive colours in his five-movement Kalevala Suite, he was looking towards Stravinsky rather than his countryman.

I have a good mind
take into my head
to start off singing
begin reciting
reeling off a tale of kin
and singing a tale of kind.
Thus begins the Kalevala, Finlands national epic, a vast collection of folk poetry from oral sung traditions gathered during a series of field trips in the 1830s by Elias Lönnrot (18021884), and published in its most door-stoppingly complete form in 1849. Organised into a series of 50 stories or runos, it tells of the creation of the world and its elements, of plants, creatures and humankind, of the adventures of gods, demigods and humans during the emergence of early Finnish society, of conflicts between the peoples of Kalevala and Pohjola, and of fantastic beasts including giant pike, bears and eagles. Lönnrots purpose was not merely to rehearse old tales, but to kindle a spirit of Finnish nationalism in his 19th-century readers, which would eventually lead to Finlands independence from Russia (under which it had been merely an autonomous grand duchy) in 1917.

Artists of all sorts were quick to take up the baton, notably in the graphic arts, and more gradually in music, with Fredrik Pacius, Filip von Schantz and Robert Kajanus being among the first composers to be drawn to the Kalevalas heady mixture of ancient myth and Romantic nationalism. But it was Jean Sibelius, starting in 1892 with his five-movement choral symphony Kullervo (withdrawn less than a year after its premiere, and only re-emerging over the last 50 years), who really got the ball rolling. A string of Sibelius masterpieces including the Lemminkäinen Suite (1904, containing the ever-popular Swan of Tuonela), Pohjolas Daughter (1906), Luonnotar (1913) and Tapiola (1926) serve as eloquent testimony to the inspirational powers of the Kalevalas verses.

Other Finnish composers inspired by the Kalevala have been largely overshadowed by this Sibelian inheritance, certainly as far as international audiences are concerned. So the latest BIS disc from the Lahti Symphony Orchestra, under conductor Dima Slobodeniouk, deserves a warm welcome. It includes a hitherto unrecorded version of a movement from Sibeliuss Lemminkäinen Suite alongside orchestral rarities by three of Sibeliuss younger contemporaries: Leevi Madetoja (18871947), Uuno Klami (19001961) and Tauno Pylkkänen (19181980).

The disc opens with Madetojas symphonic poem Kullervo (1913), named after one of the Kalevalas key human characters, a tragic, vengeful, quasi-Oedipal figure who sets out to wreak revenge on those who have wronged him and finally takes his own life. Madetojas work begins grippingly with an angry string tremolo and a unison horn call which together suggest Kullervo as he sets off to take on his enemies. Tightly organised across its quarter-of-an-hour span, it is steeped in the dynamic late-Romanticism of Tchaikovsky, vibrantly scored with plenty of characterful music for woodwind and brass, and with expansive lyrical episodes offering timely balance from the ongoing drama (vividly shaped here by Slobodeniouk and the Lahtians) before the inevitable morendo close.

Uuno Klamis teachers included Madetoja, but his music could hardly be more different. Stunningly orchestrated, his Kalevala Suite (193343) takes in the broad sweep of Lönnrots epic, from The Creation of the Earth (first movement) and of the plants, trees and elements (second and third), to the human drama of the young, roguish skirt- (and swan-) chaser Lemminkäinen as his body is cradled by his mother, and finally The Forging of the Sampo (a mysterious machine that brings its owner untold riches). Klamis rural origins, his early activities as a café pianist, and his visit to Paris in the mid-1920s (where he fell under the spell of Ravel, Stravinsky, Prokofiev and other cosmopolitan modernists) resulted in a uniquely catholic and often ironic musical language. The Kalevala Suite (originally devised as a choreographic oratorio) has a surer grasp of the Kalevalas folk roots than Madetojas Kullervo, with primitivist elements to its first movement, distinctly Rimsky-esque touches in The Sprout of Spring, and a sparkling scherzo entitled Terhenniemi (depicting a cloud-covered headland) wisely added to balance the rest of the work in 1943. The fourth-movement Cradle Song includes the evocative plangency of a cor anglais, while a palpable sense of mystery dominates the first half of The Forging of the Sampo before giving way to machine-like pulse and then a glorious conclusion, all superbly realised here by the Lahti players in a recording dating from 2017, the centenary of Finnish independence.

The second movement of Sibeliuss Lemminkäinen Suite, Lemminkäinen in Tuonela, is heard here in a hitherto unrecorded interim version that is substantially shorter than the 1896 version (part of BISs acclaimed Sibelius Edition), but still longer than the familiar revision of 1939. Tracing Lemminkäinens journey to the Underworld (Tuonela), his death and dismemberment, and his discovery, painstaking piecing-together and restoration to life by his mother, this is one of Sibeliuss most powerful vignettes. This performance, including exquisitely sensitive playing from the Lahti SOs strings and woodwind, forms an essential adjunct for those who already know the standard and 1896 versions of the score.

Rounding off proceedings is Pylkkänens bracing Kullervo Goes to War (1942). Best known today for his operas, Pylkkänen (like Klami) studied with Madetoja, and his music in this 10-minute orchestral piece demonstrates a more direct line to his teachers late Romanticism, albeit with a distinctly 20th-century tinge. Theres an urgency to this music (and not just in the galloping figures as Kullervo rides off to war) that evokes its composition in a modern period of terrible conflict, but combined with a filmic command of pacing, drama and scene-suggestion that make it an ideal close to this absorbing programme.

The recordings, made between September 2017 and January 2020 at Lahtis Sibelius Hall, are wonderfully detailed, and BISs eco-friendly packaging includes colour reproductions of three of Joseph Alanens marvellously evocative Kalevala-inspired artworks (with The Forging of the Sampo on the cover). It all makes for a most compelling issue of too-seldom-heard Finnish music.

The Legend of Jean Sibelius