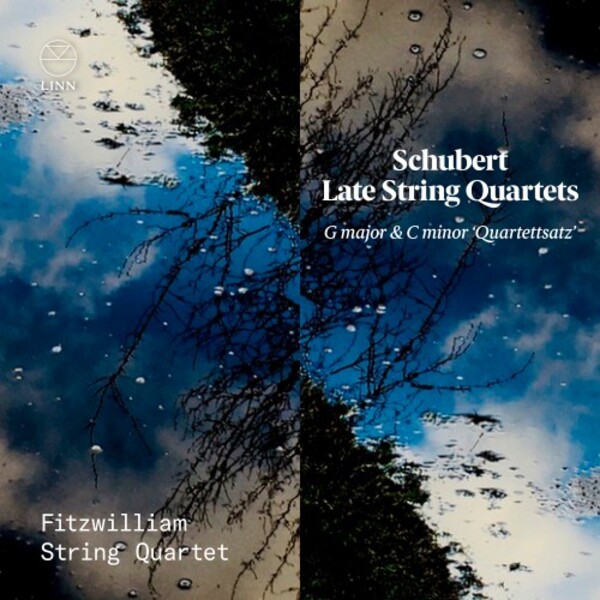 Having celebrated its fiftieth anniversary in 2019, it is perhaps remarkable that the Fitzwilliam String Quartet has not already recorded this towering pinnacle of Western music repertoire: Schuberts String Quartet in G major, D887. This revelatory recording on period instruments proves it was well worth the wait! The works idiomatic grandeur and overall complexity coupled with its everchanging tonalities and otherworldly atmosphere call for the sort of stamina that is the privilege of a limited few. The Fitzwilliams rise admirably to the challenge, demonstrating the characteristic expertise which has defined their recordings over many decades. Inexplicably left unfinished, the C minor Quartettsatz rounds off the programme. This chiseled, and yet formally unorthodox, single movement is presented here with its Andante second movement completed by leading Schubert scholar Brian Newbould.

Period-style performances of Schuberts great quartets are rare: although the works are on the surface less musically problematic, more lyrical than Beethoven's late quartets from the same years, they are every bit as demanding for players. So it has been a bold move for the Fitzwilliam String Quartet  one of Britains most revered chamber groups, which recently marked its 50th anniversary  to tackle these masterpieces on instruments set up in period manner, with thick gut strings in the 19th-century Viennese style. Following on from their fine 2018 account of the Rosamunde and Death and the Maiden Quartets on the Divine Art label, they now return to Linn Records to tackle the C minor Quartettsatz (quartet movement) and the final, great G major Quartet, D887. Viola player Alan George  the groups spiritual leader, and only remaining founding player in the line-up  explains the interpretative challenges in his customarily engaging and informative booklet notes: instruments, playing style, pitch, dynamic markings (including the infamous Schubertian accents/hairpins!) and tempo have all been given careful thought, as is abundantly evident from the performances themselves.

The other distinctive feature of this disc is that it includes Brian Newboulds completion of the A flat major Andante that was to be the second movement of the Quartettsatz Quartet, but which peters out after 41 bars, leaving this work  like so many of Schuberts instrumental projects, not least the Unfinished Symphony  as a tantalising torso. Newbould, with his vast experience of completing Schuberts incomplete fragments (including the Unfinished), is just the person to tackle this project, and his completion of the Andante  basically everything you hear from 218 on this 843 track  is both sympathetic and musically completely convincing, a sublime counterbalance to the dramatically scurrying, formally ambitious Quartettsatz itself.

This period performance emphasises the musics edginess, but theres also a lovely, delicate, fragile sweetness to the lyrical passages that is only possible with period-style instruments. Although the pitch of these performances (A=433) is marginally flatter than modern concert pitch, theres a wonderfully elevated feel to the tone in this incomplete C minor work, which also hints at Schubert wanting to expand the bounds of the quartet genre without yet (December 1820) quite having the musical courage or resources to attempt the feat.

Six years later, with the Rosamunde and Death and the Maiden Quartets behind him, Schubert wrote what is for many the greatest of all his string quartets, the gloriously expansive G major Quartet. If, as the Schubert biographer John Reed has suggested, its relative unfamiliarity is due to its lack of extramusical associations compared with its two predecessors, that is to the loss of audiences, for this is a work to rank alongside the Great C major Symphony of roughly the same period (the Symphony was finished first): formally ambitious and musically affirmative while expressing a melancholy nostalgia that is quintessentially Schubertian.

The Fitzwilliams performance brings a bittersweet tone to this great masterpiece that is entirely apt, from the opening minor-major chords (if this work is about anything, major-minor conflict is high on the list) to the splendidly exuberant concluding tarantella. Theres a resiny quality to the playing that is apparent from the outset, while the Herculean exchanges of the first movement seem to carry extra force when issuing forth from period instruments, and theres a brittleness to the top line that seems to emphasise Schuberts emotionally equivocal expressive world, while Georges viola solos really speak. The melancholy Andante, with its alarming outbursts of rage contrasting with passages of extraordinary translucence, is one of Schuberts most powerfully affecting instrumental pieces, and here receives a performance of matching penetration.

In the gossamer-textured, Mendelssohnian Scherzo, the scurrying main theme of the Allegro vivace and its accompaniment are carefully shaped to allow the leading voices through, while the Allegretto Trio, with its barrel-organ drones and ringing cello line, is marvellously gemütlich, before winding down ahead of the reprise of the Scherzo. The Allegro assai finale is a vivid demonstration of how one doesnt need to push tempo to extremes to create a feeling of urgency. Indeed, it allows certain details (like the tricky first violin grace notes) to emerge with greater clarity, and the glorious suspended-animation chords toward the end of the exposition again have a lovely graininess to them. The players are completely alive to the jaunty Biedermeier facets of this miraculous movement, and its difficult to believe that theyve only had this work in their repertoire for a few years. With a finely-focused recording made in January 2020 by Philip Hodds in St Martins East Woodhay, Newbury Hill, and an evocative cover photograph taken during lockdown by the FSQs leader Lucy Russell, this absorbing release will demand attention from anyone with an ear for the chamber music of Viennese Classicism. The Newbould completion is certainly the cherry on the cake, but theres so much else to enjoy besides!