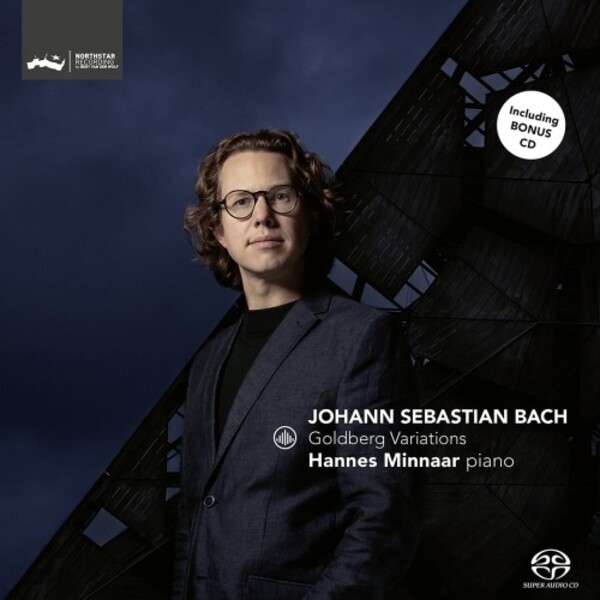 Critically acclaimed pianist Hannes Minnaar presents a new account of the Goldberg Variations, a rendition which sums up all the features of a contemporary interpretation.

A bonus CD with works by Daan Manneke is included.

Hannes Minnaar received international acclaim after winning prizes at the Queen Elisabeth Competition (2010, 3rd prize) and the Geneva International Music Competition (2008, 2nd prize) and being awarded a Borletti-Buitoni Trust Fellowship (2011). He studied with Jan Wijn at the Amsterdam Conservatory, graduating with the highest distinction and took master classes with Menahem Pressler and Ferenc Rados. In addition, he studied organ with Jacques van Oortmerssen.

Minnaar was soloist with various orchestras, including the Royal Concertgebouw Orchestra, during which time he worked with conductors such as Marin Alsop, Jiri Belohlavek, Herbert Blomstedt, Frans Bruggen, Eliahu Inbal, Edo de Waart and Xian Zhang. He gives recitals in many European countries and around the world.

He performed at the Royal Concertgebouw (Amsterdam), Konzerthaus (Berlin), Musashino Hall (Tokyo) and the Great Hall of the Tchaikovsky Conservatory (Moscow) and was invited to the festivals of La Roque dAnth ron, Bordeaux (Jacobins) and Guangzhou.

His two solo albums are highly acclaimed. His debut album was awarded an Edison and Gramophone published a full-page article about this album. The same magazine wrote about his second album Bach inspirations: After Minnaars debut disc, this makes two hits in a row.

BBC Music Magazine selected it as Instrumental Choice of the month with 5 stars.