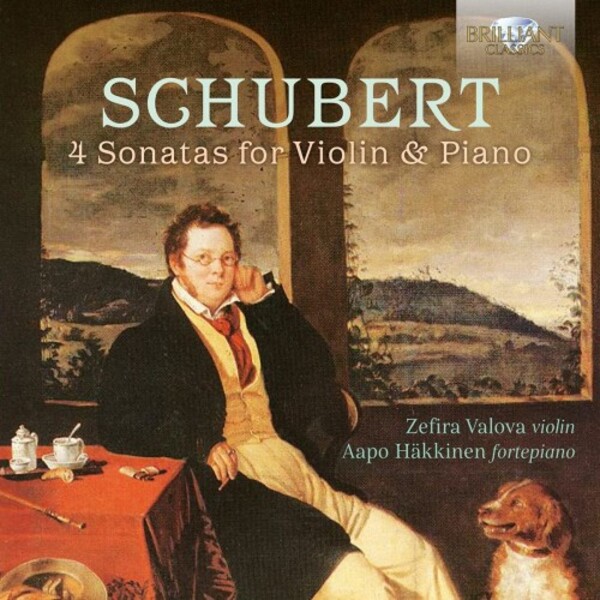 The Bulgarian violinist Zefira Valova graduated from the National Music Academy of her native Sofia, Bulgaria, before specialising in Baroque violin studies with Lucy van Dael. While still based in her homeland, having founded Bulgarias only annual early-music festival (Sofia Baroque Arts Festival) she is a frequent soloist with and guest leader of the Helsinki Baroque Orchestra under its founder-director Aapo Häkkinen, who swaps the conductors platform on this occasion for a seat at a gentle, plangent-sounding fortepiano from 1820 of Viennese manufacture  ideally suited to the repertoire at hand.

Together they make a lively and sympathetic partnership, informed by playing these youthful works in concert.

Franz Schubert (1797-1828) was just 19 years old when he wrote a trio of sonatas in the spring of 1816, but he already had four symphonies under his belt as well as masterpieces of song such as Gretchen am Spinnrade and Erlkönig. Like so much of his music, they were only published after his death, when they were given both a misleading opus number (Op.137) and even title, for the diminutive sonatina nomenclature shows little respect for both the scale of Schuberts imagination and handling of form.

On a technical level, the trio of pieces lies within the ambit of amateur players of both instruments, though more demanding for the pianist. This relative ease of execution need not obscure the rapturous melodies of the second work in the collection, D385, or its deeply felt harmonies, which culminate in an elegiac finale. By comparison, D384 is a work of sparkling good humour, melodically reminiscent of Mozart, and blessed with seemingly effortless charm.

Cast in the turbulent Erlkönig key of G minor, D408 turns the listeners ear towards Beethoven, though the concise opening melody clearly speaks with Schuberts voice. However, all three of these sonatinas are somewhat overshadowed by the Sonata D574 from the summer of the following year, 1817, which ranks among the most inspired productions of even Schuberts prodigious youth. While great violinists such as Josef Suk and Arthur Grumiaux once lavished their care over these works, they have been comparatively neglected in recent years, making this new recording using the instruments and techniques of Schuberts time all the more welcome.