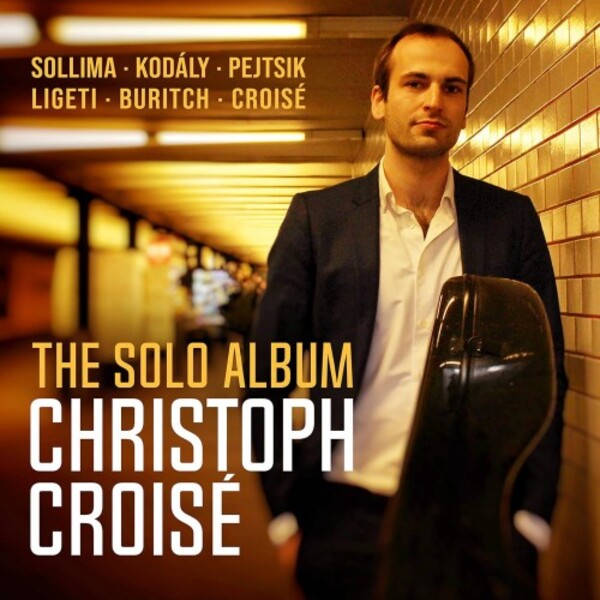 Modernism. Multiculturism. Multi-tuning. Lockdown. These are among the elements that bind the works on The Solo Album by award-winning cellist Christoph Croisé, who took the opportunity of 2020s coronavirus isolation to work intensively on a variety of solo works and also turn his hand to composition.

At the heart of the album is Hungarian composer Zoltán Kodálys epic Sonata, the first major work for solo cello after the suites by Johann Sebastian Bach which were written two centuries earlier.

The virtuosity demands of the soloist re-tuning two of the cellos strings, double-stop trills and simultaneous bowed and plucked passages, all of which Christoph dispatches with aplomb. Framing Kodalys Sonata are works by two compatriots, György Ligetis two-movement Sonata which draws inspiration from Béla Bartók, and the more recent Stonehenge by cellist, composer and pop-music producer Péter Pejtsik which includes intimations of electric guitar.

Closing out the album, Sollimas short work Alone gives way to the albums encore, the exuberant Some like to show it off by Croatian cellist-composer Thomas Buritch.

Lauded for delicate yet virtuosic playing (BBC Music Magazine) and seamless subtleties of tone colour with plenty of edge (The Strad), Swiss-French-German cellist Christoph Croisé is quickly building an international reputation as one of the most captivating young concert soloists to emerge in recent years. Born in 1993, he made his New York debut at the age of 17 at Carnegie Hall, where he has performed on several occasions since. Today, his busy international performing schedule includes regular appearances in many of the worlds renowned concert halls.

In 2017 he was awarded the Swiss Ambassadors Award, and the following year received the Prix Jeune soliste 2019 des Medias francophone publics.

His debut album with Oxana Shevchenko was released in May 2015 on Quartz Classics, his second album, Summer Night, including Othmar Schoecks cello concerto, was released in February 2018 on GENUIN classics, and his third album (Haydn, Vivaldi Cello Concertos) was released in March 2019 on AVIE Records, winning the Supersonic Award from Pizzicato Magazine and the Clef dor for the best concerto album of 2019 from ResMusica Magazine.

His fourth release and second on AVIE, The Russian Album with pianist Alexander Panfilov, was released in November 2019. Croisé plays a rare Italian master cello, crafted in 1680. He is very thankful for the multiple scholarships granted to him in recent years by the Lyra Foundation.

[A] virtuoso and dramatic exploration of a century of solo cello music.
The Strad