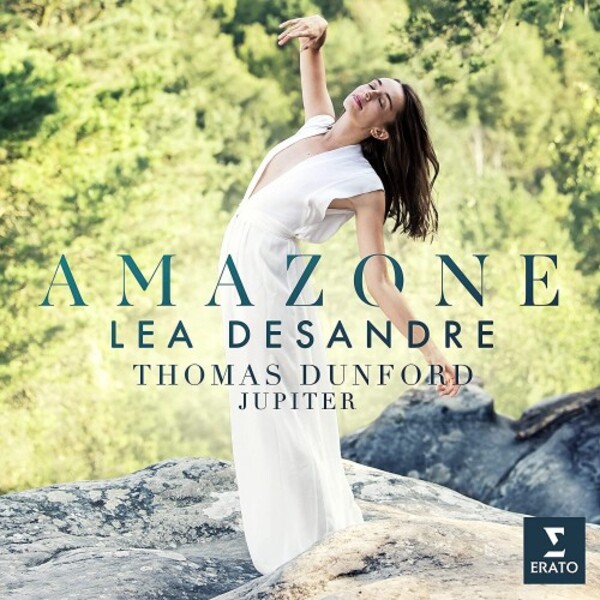 Little wonder that the fast-rising mezzo-soprano Lea Desandre, being of French-Italian descent (her name is to be pronounced allitaliana, Désandré), chose to present a sumptuous selection of French and Italian arias from the baroque era, ranging from the Neapolitans Francesco Provenzale and Giuseppe de Bottis and Venices fabled Vivaldi, to Frances celebrated Grand Siècle luminaries such as Couperin, Destouches and Philidor, and reaching as far as Germany where Saxon composer Georg Caspar Schürmann and Italian-born Carlo Pallavicino developed their careers  at Saxon courts, indeed, but still in the realm of Italian opera that was then all the rage.

Sixteen out of twenty-five arias on this album Amazone are world-premiere recordings, some of the pieces even never having been heard since their first (and last) performances 250 or 300 years ago. Vivaldi, Marais, Cavalli, Destouches and Couperin, of course, hide no secrets from anyone nowadays, but the aficionado will be astonished to discover several forgotten luminaries here, composers who were great stars and highly sought-after musicians during their lifetimes even though the passing centuries have been very unkind to them: Pallavicino, Provenzale, Schürmann, de Bottis, Viviani, all of whom worked between the 1650s and the 1750s. At any rate they have deservedly waited their turn for a few centuries in exchange for being rediscovered by Desandres delicate voice, whose timbre is so perfectly suited for this music, and whose astonishing vocalisation pyrotechnics are a pure wonder.

The programme is built around the characters of the mythological (even though recent archaeology has provided some evidence of their possible existence) Amazons  hence the title  those fabulous female warriors and hunters, who matched men in physical agility and strength, archery, riding skills and the arts of bloodthirsty combat, but who were also associated with the foundation of temples and the establishment of numerous ancient cities. These ladies were named Myrina (or Mitilene), Antiope (present both in Pallavicinos LAntiope and Vivaldis Ercole sul Termodonte, where she is the main female character although for the premiere in Rome in 1723 the role had to be sung by a castrato since a papal edict prevented women from appearing onstage in the Eternal City), Marthésia (or rather Marpesia, but old misspellings are deeply ingrained) in Destouches Marthésie, première reine des Amazones. And if Alceste is not quite a true Amazon, her name  from the Hellenic root alki/alko, conveying a sense of valour, courage and strength  does grant her an honourable place in the roll-call of Wonder Women of the Ancient World.

A handful of purely instrumental pieces are scattered throughout the album, evoking these mysterious horse-riding female warriors: Couperins LAmazône and  a sign that during the 18th Century, geography was not much of an issue  Marin Marais LAmériquaine; as well as Sinfonias from the different Amazonian operas.

Desandre, who intends to evolve slowly but surely from the baroque repertoire to the classical realm in a carefully laid-out career plan, explains her musical choices in a few words: When I was a child, my heroines flew high above the rooftops, raced through green meadows, singing as they went, dreamt beneath starry skies, and galloped away on horseback with a freedom and courage that still fascinate me today. Amazone is a hymn to the women who have guided me and continually amazed me with their kindness, their loyalty, the magic of their artistry and the strength of their actions. Amazone is a message of idealism.

William Christie as a harpsichord soloist, as well as Cecilia Bartoli and Véronique Gens in duet with Desandre, guest-star on some of the tracks in this groundbreaking recording, where she is accompanied by her favourite ensemble Jupiter led by lutenist Thomas Dunford. On the other tracks the harpsichord, both continuo and solo, is played by none else than Jean Rondeau, himself a renowned instrumentalist in his own right.

When barely aged 20, Lea Desandre was awarded a place on William Christies Le Jardin des voix Academy before she gained the prestigious Vocal Discovery distinction at the Victoires de la Musique Classique Awards in 2017. A childhood fan of Natalie Dessay, she studied with Sara Mingardo and Véronique Gens; she can also look back on a dozen years as a ballet dancer which has greatly helped sculpt her stunning stage presence. Since then she has roamed the operatic and concertante planet singing major roles and recitals in Salzburg, Aix-en-Provence, London, Vienna, Los Angeles, Paris, Berlin, Geneva, Sydney, Moscow and Shanghai, sharing the stage with Cecilia Bartoli, with William Christie (with whom she travelled half the globe on tour with Les Arts Florissants) and also with John Eliot Gardiner, Marc Minkowski, Jordi Savall and Leonardo García Alarcón, to name but a few.
The original concept of Lea Desandres Amazone is based on music of the Baroque period written specifically on the subject of the Amazons, the mythical race of female warriors.

Amazone has been recorded with the magnificent ensemble Jupiter and conductor Thomas Dunford.

Lea Desandre explores the fascinating ways that composers treat their Amazonian characters, particularly interesting figures in that they embody a male/female duality.

Gender ambiguity, which plays a role in so many operatic plots, provides an infinite source of dramatic and musical inspiration.

Amazone has three special guests, true stars in the world of Baroque music: Cecilia Bartoli and Véronique Gens appear in separate duets with Lea, and William Christie features on harpsichord in a piece by Couperin.

This is the sort of disc that makes the reviewers task an unalloyed pleasure. Mezzo-soprano Lea Desandre, a discovery of William Christies, has already appeared in a number of DVD opera productions as well as on several CDs. We were particularly impressed with her contributions to a disc of Handel cantatas alongside soprano Sabine Devieilhe (one of our top 10 discs of 2018). Now she headlines a disc of her own, Amazone, conceived by researcher Yannis François, in partnership with lutenist Thomas Dunfords splendid period-instrument group Jupiter. With a focus on empowered women, gender-switching and humanitys symbiotic relationship with nature, it feels very topical, even if the original attraction of these operatic works (dating between the 1660s and 1720s) may have had more to do with contemporary tropes of exoticism.

It opens with a tremendously enjoyable laughing aria from Francesco Provenzales Lo schiavo di sua moglie (Naples, 1671), marvelling at the spectacle of women warriors. With plenty of added wild, jazzy percussion to enliven the catchy rhythms, its an opportunity to savour the richness, range and agility of Desandres voice, and she sounds as though shes having the time of her life. Provenzale is one of several composers on the disc who are barely represented on record and will be known only to the most erudite of specialists. Yet the meltingly melancholic Lasciatemi morir, stelle crudeli from the same opera, beautifully performed here by Desandre and her colleagues, really takes the breath away with its insistent, ground-like ritornello. This is a number that deserves to be as well-known Didos Lament.

Another little-known name is Giovanni Buonaventura Viviani: an aria from his opera Mitilene, regina delle amazzoni (Parma, 1681), Muove il piè, furia dAverno, provides coloratura fury aplenty, which Desandre dispatches with supreme confidence and sympathy. Giuseppe de Bottis wrote an opera to the same libretto (Naples, 1707), from which the gorgeous duet Io piango / Io peno is taken, with Desandre joined here by no less than Cecilia Bartoli, as well as winning violin solos from Sophie Gent. Its a huge pleasure to hear the voices of these two mezzos entwine to such winning effect. And in a duet from Danican Philidors Les Amazones (Marly, 1700) its soprano Véronique Gens who takes the upper part in a tremendously engaging scene, opening with the sort of timpani-dominated march at which this composer excelled, and culminating in the duet proper which, with no supporting continuo instruments, has an excitedly elevated yet palpably martial atmosphere about it.

Nevertheless, this is otherwise very much Desandres disc, and the febrile intensity of her remarkable voice is put to splendid use in a pair of contrasting arias from Carlo Pallavicinos LAntiope (Dresden, 1690), with added chimes and castanets respectively enhancing their atmosphere rather than distracting from it. A trio of arias from André Cardinal Destouchess Marthésie, première reine des amazones (Fontainebleau, 1699) includes two more extremely touching numbers plus, in Quel coup me réservait la colère céleste?, an excellent excuse for some turbulent percussion (complete with thunderclaps!).

The closing section of the disc focuses on arias from Bottiss Mitilene (which reinforce the impression of a seriously underrated operatic composer) and Vivaldis Ercole sul Termodonte (Rome, 1723), including enchanting bird calls in Ippolitas Onde chiare che sussurrate and yet more impassioned fury in Antiopes Scenderò, volerò, griderò. They emphasise still further the extraordinary artistry and involvement of Desandres singing.

Instrumental interludes are frequent and deployed with the greatest sensitivity, including several atmospheric operatic sinfonias, harpsichord solos by Couperin (a Passacaille played by William Christie, and LAmazône played by Jean Rondeau), and a lute solo taken from Maraiss Pièces de viole, with plucked viol accompaniment. The instrumental contributions throughout are excellent, with exquisitely realised woodwind and string solos.

At the end, a bonus track by Dunford, entitled simply Amazones  and sung with searing intensity and generous tone by Desandre in contemporary mode  sets the seal on a remarkable album which should be required listening for all lovers of Baroque music and opera in general. Desandre, like the Amazons themselves, is assuredly a force to be reckoned with!

We very quickly learn just how characetrful Desandre can be with her amused, laughing reactions to women in battle in Non posso far, and the dark glitter of her voice in the melanchlic Lasciatemi morire... Technically and stylistically, too, she is very accomplished, with the breath control of a peral diver in Veni, corri and the darting agility of a jealous mind in Sdegni fuori barbari.  Anthony Pryer
BBC Music Magazine November 2021

This is a stonkingly good album. It makes me wonder: what exactly are these enviously intelligent, inventive and generous musicians drinking? ... Amazone is a journey of delight, dance, mystery, strength and doomed love. I would be greedy to want much more.  Mark Seow
Gramophone Awards 2021