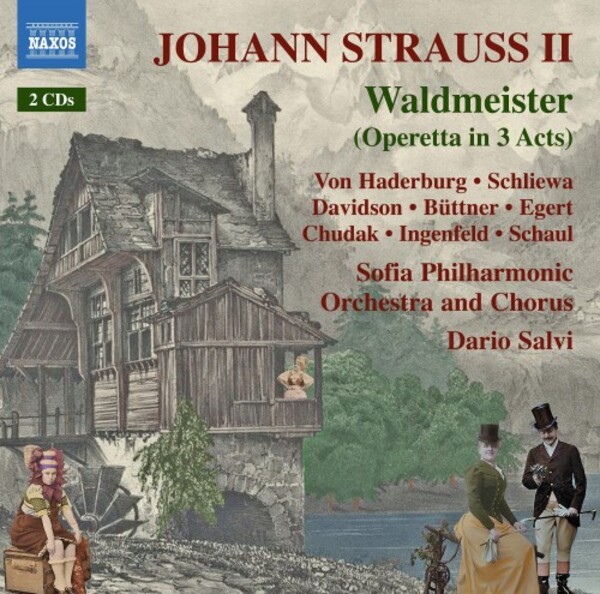 Johann Strauss IIs operetta Waldmeister (Woodruff) was staged for the first time in December 1895. The plotline  a case of mistaken identity somewhat reminiscent of Die Fledermaus  is lively, but the libretto itself proved to be less than satisfying. However, the vivacious and immaculately orchestrated music featuring several pieces that would go on to become famous, including the waltz Trau, schau, wem and the polka Klipp-Klapp-Galopp, earned Strauss immense admiration. Attending the opening night with Johannes Brahms was Viennas leading critic Eduard Hanslick who hailed the new work by asserting that Mozarts golden sound reigns in [Strausss] orchestra.

This world premiere recording of Johann Strauss IIs Waldmeister is historic, as it means that all of the composers operettas are now available on commercial recordings. This also follows our 2020 release of Blindekuh (866043435), which received four stars from BBC Music Magazine: Both chorus and orchestra achieve a good standard and conductor Dario Salvi motivates the performance effectively.

The new release also features the same cast in Blindekuh, led by soprano Martina Bortolotti von Haderburg. Das Südtiroler Wochenmagazin commented that she sings the role of the fun-loving Waldine with a beautiful, bright voice, light-hearted ease and excellent comprehensibility of the text.

Founded in 1928, the Sofia Philharmonic Orchestra has long established itself as one of the leading institutions in Bulgarias musical life, representative of the overall contemporary musical culture of the country.

Conductor Dario Salvi is also praised for his ongoing cycle of Aubers opera overtures. He has also conducted the world premiere recording of Bronsarts Jery und Bätely (8660476), praised by the Operetta Research Center: Salvi turns this symphonic piece into a veritable musical tableau, which he colours with his beautifully nuanced baton.

Humperdinck - Music for the Stage