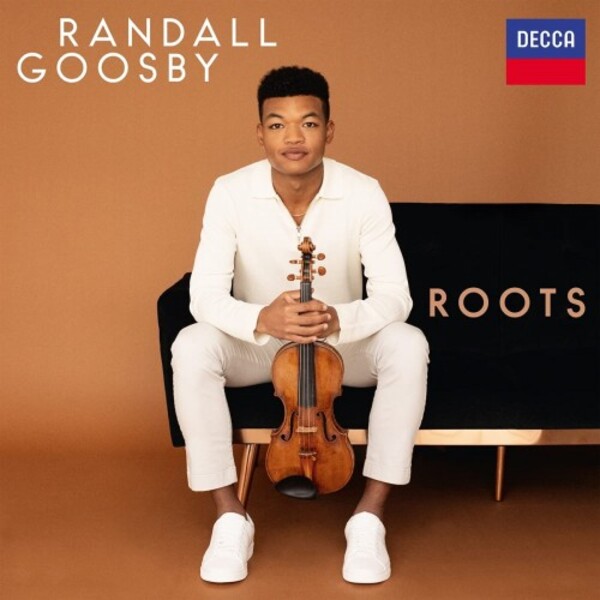 Sonatina in G major for violin and piano, op.100

Suite for Violin and Piano

Sonatina in G major for violin and piano, op.100

Suite for Violin and Piano

Roots is an exploration of the music written by Black composers and inspired by Black culture. A homage to the pioneering musicians who paved the way for Randall Goosby and his generation. Looking to the future with a specially commissioned piece by young Black composer Xavier Dubois Foley. World premiere recordings of music by Florence Price that was rescued from an abandoned house over half a century after her death.

The Perlman protégé celebrates his own journey and shows young people that music can inspire regardless of background. Produced by 2021 GRAMMY Producer of the Year, David Frost.

The debut album of Randall Goosby, a Juilliard-trained violinist whose mentors include Sanford Allen and Itzhak Perlman, comes at a time when black composers are receiving increased, and in most cases long-overdue, attention. Goosby, in collaboration with pianist Zhu Wang and composer and double bass player Xavier Dubois Foley, has put together an attractive yet compelling programme entitled Roots, celebrating black composers from Samuel Coleridge-Taylor (1875-1912) to the present day, as well as music by two great figures (Dvořák and Gershwin) in tribute to the admiration and respect they showed for African-American and Native American people. With further support from Ayke Agus (pianist for the great Jascha Heifetz) and Florence Price expert Michelle Cann, its clear from the outset that much care has gone into this consistently appealing album, recorded in December 2020 and February 2021.

It opens with a sparklingly virtuosic duet for violin and double bass by Foley himself. Foley and Goosby first met in 2010 at the Sphinx Competition in Detroit, where Goosby at the age of 13 became the youngest winner of first prize in the junior division. Shelter Island is named after the venue of the Perlman Music Program where the two met again the following year. Its a bluesy piece, technically demanding for both violin and double bass: edgy, spiky, snappy (at times literally), but with moments of introspection and an engaging swing to it, its surely destined to become a modern virtuoso showpiece.

Even more technically challenging is Coleridge-Taylor Perkinson's Blue/s Forms (1979) for solo violin, which combines the Baroque contrapuntal tradition of violin writing with strong Blues and American classical influences. Perkinson dedicated this three-movement work to Sanford Allen, and its obvious that Goosby has learnt much from his teacher. The tone from his Sennhauser Guarneri of 1735 (on loan from Chicagos Stradivari society) is rich but lithe and pliant, bringing out all of the musics depth of feeling while fully responsive to the musics virtuoso demands.

Four of Heifetzs famous transcriptions from Gershwins Porgy and Bess receive thoroughly idiomatic performances, Goosby perfectly catching the dreamy inflections in Summertime and the suggestive swoops in It Aint Necessarily So; this is generous-hearted playing, technically superb but with great emotional warmth and a natural flow even in the more obviously virtuosic moments. The set closes with an endearingly tender performance of Bess, You Is My Woman Now.

One of the highlights of the album is the Suite for Violin and Piano by William Grant Still (1895-1978), the leading African-American composer of the first half of the 20th century. Still was a key musical figure in the Harlem Renaissance, and each of the Suites three movements was suggested by a work from sculptors active within the movement: Richmond Barthé, Sargent Johnson and Augusta Savage. Most moving is the central Mother and Child (after Johnson), where Goosby takes more time to dwell on the intimately expressive lines than Rachel Barton Pine did on her Blues Dialogues disc for the Cedille label. The closing Gamin (after a bust of a Harlem youngster by Savage) has an undeniable chirpiness to it, suggesting the cheeky swagger of the youth with his cap cocked to one side.

Three world premieres follow, all works by Florence Price (1887-1953) discovered as recently as 2009 and welcome additions to her growing representation on disc. Adoration is a moving miniature, but it is the two Fantasies, in editions prepared by John M. Cooper, that really catch the attention, particularly the second with its long piano introduction paving the way for a soulful violin solo that increasingly gives way to passages of real fire. These are splendid finds, and in Goosby and Wang they have perfect advocates.

Samuel Coleridge-Taylors transcription of the spiritual Deep River, in an arrangement by the great violinist Maud Powell (a pupil of Joachim who was an early champion of the Sibelius Concerto, as well as actively supporting African-American musicians), makes a lovely interlude. Goosby and Wang close the disc with Dvořáks G major Sonatina, op.100. Composed during the composers time in the United States, this is a jewel of a piece, with clear Native American and African-American influences, as well as Dvořáks trademark lyrical stamp. The idea for the Larghetto slow movement was scribbled down on Dvořáks shirt cuff, supposedly during a visit to the Minnehaha Falls in Minneapolis, and its bathed in a glowing light in this performance, while the Scherzo has a delightfully confident spring in its step, the hurdy-gurdy like episodes for the violin dashed off with evident glee, and the closing Dvořák, in which the magic of Dvořáks other American works is palpable, has the disc ending on a real high.

This is a marvellous debut from a hugely gifted young artist, and a clearly heartfelt tribute to the lives, experiences and creations of musicians who paved the way for Goosby and many others. It wears its message lightly, and is an absolute joy from start to finish. Randall Goosby is clearly a name to watch, and we hope to hear more from him soon!

Goosbys mentors include Sanford Allen, the dedicatee of Perkinsons pieces and the first black violinist in the New York Philharmonic, and Itzhak Perlman. You can hear the influence of the latter in the suavity and lushness of his playing, never more so than in the slow middle movement of William Grant Stills 1943 Suite: Goosby finds a special tone here, soft but vibrant, and the melody soars.  Erica Jeal
The Guardian 24 June 2021

Theres not a trace of grandstanding, or exaggeration for easy effect. This is selfless, stylish playing which  paradoxically  ends up by projecting the personalities of both artists with even more freshness and warmth. ... Make no mistake, Goosby is a virtuoso: he can sing, full-throated, and shape fluid, gleaming phrases high on the E string with the best of them. But it never sounds knowing or contrived... one of the more intelligent  and engaging  debut discs Ive heard in recent years.  Richard Bratby
Gramophone August 2021