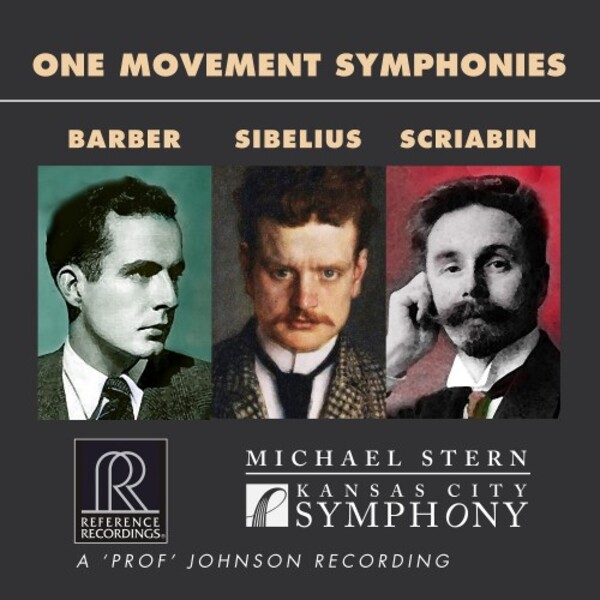 Reference Recordings proudly presents a unique album of one movement symphonies composed by Barber, Sibelius and Scriabin, in an outstanding interpretation from Michael Stern and the Kansas City Symphony. This album was recorded in the beautiful and acoustically acclaimed Helzberg Hall, Kauffman Center for the Performing Arts. It was produced by David Frost, seven-time winner of the Classical Producer of the Year Grammy award. It was recorded by RRs engineering team, comprised of Grammy-winning engineer and Technical Director Keith O. Johnson, and multi-Grammy nominated engineer Sean Martin. Music Director Michael Stern is in his second decade with the Kansas City Symphony, hailed for its remarkable artistic ascent, original programming, organisational development and stability, as well as the extraordinary growth of its varied audiences since his tenure began. The Kansas City Symphony has a vision to transform hearts, minds and its community through the power of symphonic music. Founded in 1982, the Symphony has established itself as a major force in the cultural life of the community. Praised for performances of uncompromising standard, the orchestra is the largest in the region and holds a national reputation for excellence.

This is the ninth in Reference Recordings series with Kansas City Symphony. We are proud of the wide range of repertoire in this series, including works of Sullivan and Sibelius on Shakespeares Tempest; the Grammy Award-winning album Brittens Orchestra; an Elgar/Vaughan Williams project; Miraculous Metamorphoses containing works of Hindemith, Prokofiev and Bartók; an all-Saint-Saëns CD featuring the magnificent Organ Symphony; an album of works of contemporary American composer Adam Schoenberg (nominated for two Grammy Awards); Gustav Holst: The Planets and The Perfect Fool; and most recently Jonathans Leshnoffs Symphony no.3 and Piano Concerto. In addition, a live recording of works of Johannes Brahms has been recorded and slated for future release.

For 41 years, Reference Recordings has been one of the most innovative and respected independent labels in the music business. RR releases have been highly praised for their dedication to high quality sound in the service of great music. Founder Tam Henderson was joined in 1978 by engineer Keith O. Johnson, and some 145 projects later, RR is still recording what many consider to be the finest-sounding classical, jazz and blues discs in the world.

Saint-Saens - Symphony No.3 Organ, and other works

Saint-Saens - Symphony no.3 Organ and other works

Holst - The Planets, The Perfect Fool