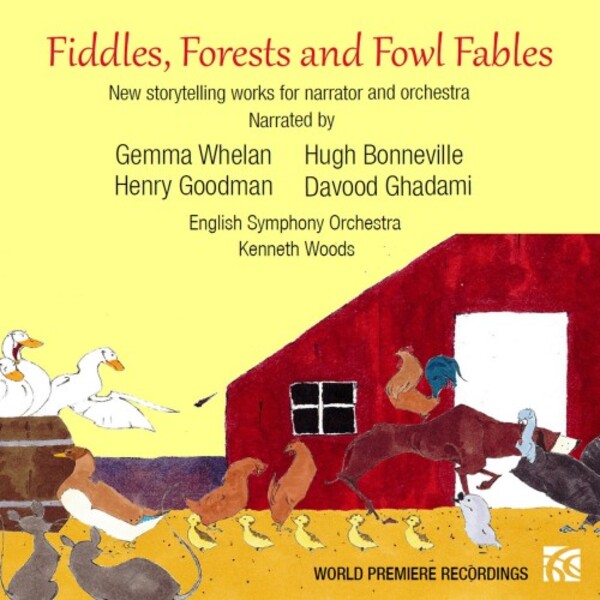 Have you ever been on a long journey with your family and, after hours in the car or on the plane, you were so bored you thought you just might go mad? Well, thats what this record is for. Just when youre about to say are we there yet for the 400th time, instead try saying Mum, can we listen to Lubin again? I promise, the car will feel like its going twice as fast once the music starts.

Now, it may come as a surprise to you, but your parents get just as bored and fed up as you do, so weve made sure theyll enjoy these stories just as much as their kids. Just in a different way  there are aspects to all five stories that we are pretty sure older listeners will connect with.

My friend David, who wrote Lubin, from Chelm, got interested in creating new musical storytelling works because he was reading bedtime stories to his two little girls. Several years later, I started writing The Ugly Duckling for my kids when they were little for the same reason. Its been great over the years to see thousands of young people at our concerts laugh at the exploits of Lubin, the hapless robbers in The Bremen Town Musicians or the grandiose Condessa Duck. But, if were able to put a smile on your face on a rainy afternoon at home, or help the trip to your summer holidays go a bit quicker, then well all be very happy. Enjoy!
 Ken Woods
The Bremen Town Musicians
David Yang commissioned The Bremen Town Musicians for Auricolae in 2008. In 2016 the conductor Kenneth Woods, who as cellist performed and recorded Bremen with Auricolae, asked me to orchestrate it for his English Symphony Orchestra. Ive adapted the Brothers Grimm story for my libretto, changing none of the salient features of this tale of four animals who, seeking fortune in the far city of Bremen, fall among thieves, outwit them, and find their good fortune as friends together, never arriving in Bremen.  Kile Smith

The Ugly Duckling
When an aging Hans Christian Andersen was asked why have you not written an autobiography? he answered simply, I have. It is called The Ugly Duckling. Listeners who have grown up with the charming song sung by Danny Kaye in the 1950s Andersen biopic may be surprised to learn that Andersens story is different in dozens of ways, right down to the colour of the Ducklings feathers, which are, in fact, grey rather than stubby and brown.  Kenneth Woods

Lubin, from Chelm
Lubin lived at home, with his mother. He was a bit of a schlemiel, laying around the house all day, not doing nothing Until one day, his mamma said to him Lubin, a real job you must get. His ensuing adventures are proof positive that it is possible to fail your way to great success. Lubin, from Chelm is a hilarious re-telling of the traditional English folk tale, Lazy Jack, relocated to the shtetl and brought to life with abundantly witty Yiddish turns of phrase and evocative Klezmer musical stylings by American composer David Yankele Yang and orchestrated by Kenneth Woods.

The Warrior Violinist
In 2012 David Yang and his storytelling music troupe Auricolae asked me to write The Warrior Violinist, based on an Egyptian folk tale, for violin, cello and narrator. In the summer of 2020 Ken Woods asked me to prepare a version for this recording project. In addition to fleshing out harmonies, adding contrapuntal lines, and creating fuller and richer orchestral sonorities, I was able to expand the presence of the solo violin so it could more actively fulfil its role as the protagonist of the story.  Jay Reise

Hansel and Gretel
I wrote Hansel and Gretel to perform with Auricolae in 2008, and orchestrated it a few years later, at the behest of Maestro Kenneth Woods. Perhaps in response to the gothic nature of the story, the piece is very selfconsciously Germanic. My gratitude and awe also go to Henry Goodman, whose nuanced and thrilling interpretation of the story elevates the piece immeasurably.  Thomas Kraines

Hugh Bonnevilles film credits include Notting Hill, Iris, The Monuments Men, Viceroys House, the two Paddington movies, Downton Abbey and To Olivia. His television roles include Ian Fletcher in the BAFTA-winning Twenty Twelve and W1A and Robert Crawley in ITVs global hit, Downton Abbey, for which he received nominations for a Golden Globe, two Emmys. Hughs stage career spans more than three decades and includes seasons with the National Theatre and the RSC.

Davood Ghadami is best known for his portrayal of Kush Kazemi in Eastenders since 2014. Other television credits include series regular Duncan Clark in Taggart as well as roles in Doctor Who, Top Boy, Law & Order and Silent Witness. He also appeared in the 15th series of Strictly Come Dancing, making it through to the quarter finals. His film credits include Shop Girl, John Carter of Mars and Survivor. On stage, Davood appeared at The National Theatre as Amir in Mike Bartletts 13.

Henry Goodman is a leading English actor who has worked extensively in television, film and in theatre. TV credits include Sir Humphrey in Yes, Prime Minister and more recently The New Pope. Film credits include The Chosen One, The Last Planet, The Good Traitor, Avengers: Age of Ultron, Notting Hill, and Love Gets A Room. Recent audio work includes: Victoria Park by Gemma Reeves, Jaws by Peter Benchley and Fall: The Mystery of Robert Maxwell by John Preston both for BBC Radio 4.