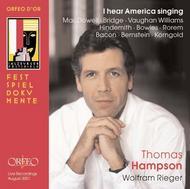 America's leading baritone, Thomas Hampson has been recognised for his versatility and breadth of achievement in opera, song, recording, research and pedagogy. He studied with Elisabeth Schwarzkopf, Martial Singher and Horst Günther, enjoys an international career that has taken him to all the world's most prestigious stages and is one of today's most respected, innovative and sought-after soloists.

The 'Hampson Project' at Salzburg's 2001 Festival marked the launch of a 4-concert exploration of American song. Disc one features the concert programme from 12th August, whilst disc two features highlights from the other three concerts and bonus tracks from 2005's 'Forbidden & Banished' project, featuring persecuted composers.Thomas Hampson's spoken introductions illuminate and enhance the entire proceedings.