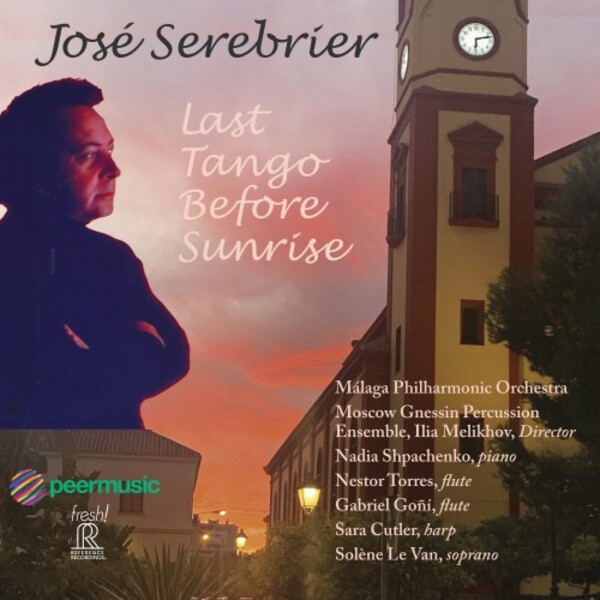 Reference Recordings is proud to present new recordings of a compendium of nine works of José Serebrier, including four world premières and the first digital recording of his dramatic Symphony for Percussion, performed by the Gnessin Percussion Ensemble of Moscow.

Grammy-winning conductor and composer José Serebrier is one of the most-recorded classical artists in history. Born in 1938 in Uruguay of Russian and Polish parents, he has conducted most of the major orchestras around the world. He now has well over three hundred releases and multiple international awards. His projects have received thirty-seven Grammy and Latin Grammy nominations in recent years. His published compositions, many of them written at an early age, number over one hundred. Reference Recordings has made four previous albums with Maestro Serebrier. The works on this new album use a variety of musical ensembles ranging from solo piano and a percussion ensemble, to full orchestra playing tangos, flute concerti and a harp concerto written throughout the span of his long career. The earliest here is his 1957 Piano Sonata (world première recording) performed by Grammy-winning pianist Nadia Shpachenko, and the most recent is the title track Last Tango Before Sunrise, which he wrote in 2018 and recorded in Spain in 2019, conducting the Málaga Philharmonic Orchestra.

This album was produced by Julio Bagué and Mary Megan Peer for Peer-Southern Productions who are the main publishers of Josè Serebriers music, including all the compositions on this album. Reference Recordings is grateful for their support in making this recording possible.

Reference Recordings was founded in 1976 in San Francisco. The label has multiple Grammy awards and a catalogue that includes numerous american and international orchestras, ensembles and choruses. FRESH! is part of Reference Recordings mission to encourage unique and fine artists, and give them a strong platform for promotion and sales nationally and internationally.