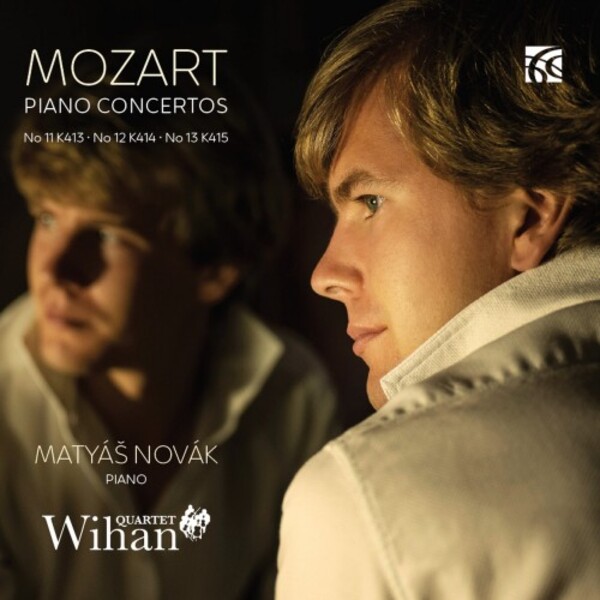 As a pianist, Mozart performed at many concerts and music academies, for which he had to build a repertoire; similarly, he was in need of educational repertoire for his students. Between 1782 and 1786, Mozart composed, in addition to piano sonatas and variations, fourteen new concertos for piano with orchestra. He was certainly no novice in this field, already having no less than ten piano concertos under his belt (not to mention his violin concertos and his first collection of concertos for wind instruments). As such, Mozarts Vienna period begins with a remarkable trio of piano concertos, K. 413, 414 and 415. Mozart undoubtedly wrote them for himself. His concert activity in Vienna was extraordinary, especially in the first years, where he met with success as both a soloist and as a composer. He therefore decided to publish this trio at his own expense (on a subscription basis), obviously with an eye towards having another source of income.

Matyá Novák who began to play the piano at the age of 5 is currently attending the Academy of Performing Arts in Prague, specifically the class conducted by Prof. Ivan Klánský. He is also a student at the renowned piano academy Incontri col Maestro in Imola, Italy, where he is studying with Prof. Boris Petrushansky. Matyá has won several national and international competitions and tours both at home and abroad. He has given recitals in a throughout Europe, Thailand and the USA. Between 2015 and 2016 he undertook two successful concert tours in China and in 2017 he debuted in Carnegie Hall, New York. Matyá is a versatile artist, sought-after chamber player and accompanist.

The Wihan Quartet has been described by International Record Review as: one of the best quartets in the world today. In 2015 the Quartet celebrated 30 years since its formation, and over the years it has developed an outstanding reputation for the interpretation of its native Czech heritage, and of the many classical, romantic and modern masterpieces of the string quartet repertoire. The Wihan Quartet has won many International Competitions including The Prague Spring Festival and the Osaka Chamber Festa. In 1991, they won both the First Prize and the Audience Prize in the London International String Quartet Competition.