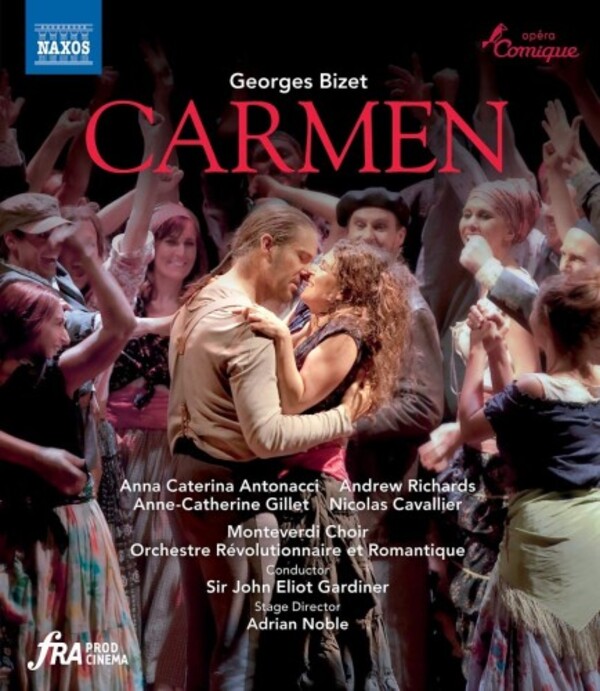 Georges Bizet died at the tragically young age of 36 while Carmen was still in its first run, and he never witnessed the huge international acclaim his opera received. Filled with jealousy and passion, the gripping and ultimately tragic narrative of Carmen initially shocked audiences, but with an abundance of memorable tunes, it remains unchallenged as one of the most popular operas ever written. Carmen received its premiere at the Opéra Comique in Paris in 1875, and this internationally acclaimed production, performed on period instruments, represents a triumphant return to its home theatre. Carmen has never sounded more revolutionary, romantic or thrillingly vibrant (The Times, London).

This DVD production is special in returning Carmen to its original home at the Opéra Comique in Paris, with the sounds of the orchestra of its day reproduced in the excellent Orchestre Révolutionnaire et Romantique conducted by period music specialist Sir John Eliot Gardiner. Produced to the highest standards, the film was a co-production with French television directed by François Roussillon, who has also directed numerous Naxos DVD opera productions.

This production was acclaimed in Europe and beyond.

Anna Caterina Antonacci dominates the cast entirely  less carnivorous and more complex than on Covent Gardens DVD, singing with a lighter, more nuanced touch. Andrew Richards José, initially pallid and unromantic, warms up impressively but remains the lesser figure, as does Nicolas Cavaliers soft-centred Escamillo, despite his native French. Anne-Catherine Gillet, though, makes an idiomatic Micaëla, and the Francophone gypsy girls and smugglers gain a zip which the British-cast lesser roles lack  Classical-Music.com

Conductor John Eliot Gardiner brings along his polished Orchestre Révolutionnaire et Romantique to play on instruments which recreate the lost sound of the 19th-century orchestra. His Monteverdi Choir, with a discipline and artistic commitment not found in Parisian opera choruses, also showed a real sense of the theatre.  Operatoday.com