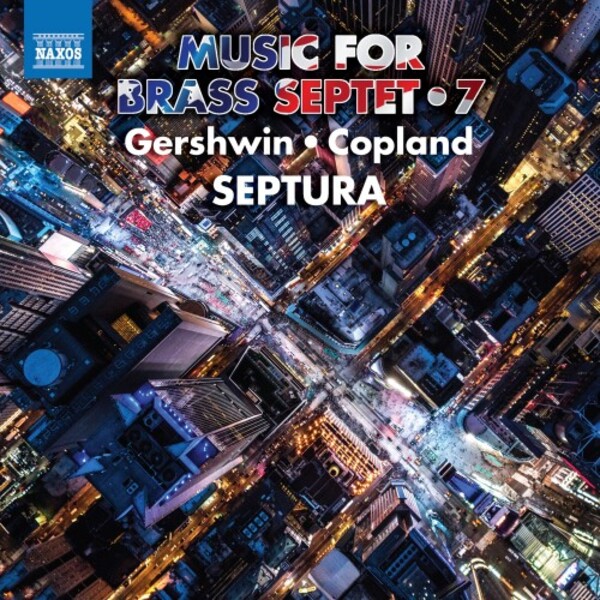 In this seventh volume of Music for Brass Septet, Septura survey two of Americas greatest and most representative composers. Gershwins An American in Paris charts a visitors stroll around the French capital, absorbing the citys atmosphere and charm, whereas the synergy of classical form and jazz animates Gershwins unique Preludes. Coplands Quiet City depicts a contrasting and more understated cityscape, while the suite from the ballet Appalachian Spring displays Septuras luminous virtuosity.

Septura is a brass septet and their programmes of arrangements represent historical periods, such as the Baroque, and national styles. Septuras previous recordings include British music (Vol.6, 8573825) released in October 2018 and considered irresistible by The Observer (London), and arrangements of French repertoire in Vol.5 (8573619) in which Septura always sounds terrific  tone qualities, blend, and intonation are always wonderful, ensemble always precise (American Record Guide).

Vol.4 included music of the Renaissance era, and was highly praised by Brass Band World: There is an overwhelming sense of sincerity present in both the skilfully crafted new arrangements and the execution of performance, which is characterised by an approach to sound concept and turn of phrase that is seemingly laced with historical consideration and musical purpose.

Septura brings together Londons leading players to redefine brass chamber music through the uniquely expressive sound of the brass septet. By creating a canon of transcriptions, arrangements and new commissions for this brand new classical configuration, Septura aims to re-cast the brass ensemble as a serious artistic medium. Currently ensemble-in-residence at the Royal Academy of Music in London, the group is recording a series of albums for Naxos, each focused on a particular period, genre and set of composers, creating a counterfactual history of brass chamber music. Septuras members are the leading players of the new generation of British brass musicians, holding principal positions in the London Symphony, Philharmonia, Royal Philharmonic, City of Birmingham Symphony, Basel Symphony and Aurora Orchestras.