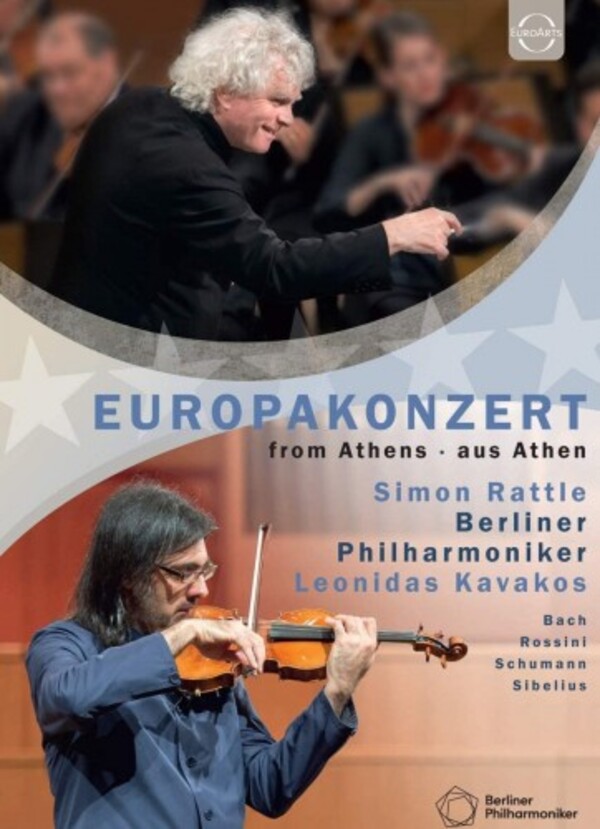 Redesign/repackaging of the successful DVD & Blu-ray

The founding of the Berliner Philharmoniker on 1 May 1882 is celebrated annually in an European city of cultural significance. In 2015 the Europakonzert took place in Athens great concert hall, the Megaron, with Leonidas Kavakos joining the Berliner Philharmoniker. The Greek violinist celebrated a home triumph with his interpretations of Sibeliuss Violin Concerto and Bachs Largo from the Sonata no.3.

The Europakonzert in Greece brought the Berliner Philharmoniker and Sir Simon Rattle to the country the name Europe comes from, the cradle of democracy. The programme guided the audience on a musical journey through Europe with works by Rossini, Schumann and Sibelius.

The violinist and conductor Leonidas Kavakos was born in Athens in 1967. He began his musical career at the Greek Conservatory of Music in Athens under Stelios Kafantaris. He was granted permission to play the famous Guarnieri del Gesù "Il Cannone" violin, an instrument that once belonged to Niccolò Paganini. Kavakos is an internationally sought-after soloist and chamber music performer, and directs his own music festival at the Megaron in Athens.
Picture: 16:9  NTSC
Sound: PCM Stereo, DD 5.0, DTS 5.0
Subtitles: -
Region code: 0 (worldwide)
Running time: 90 mins