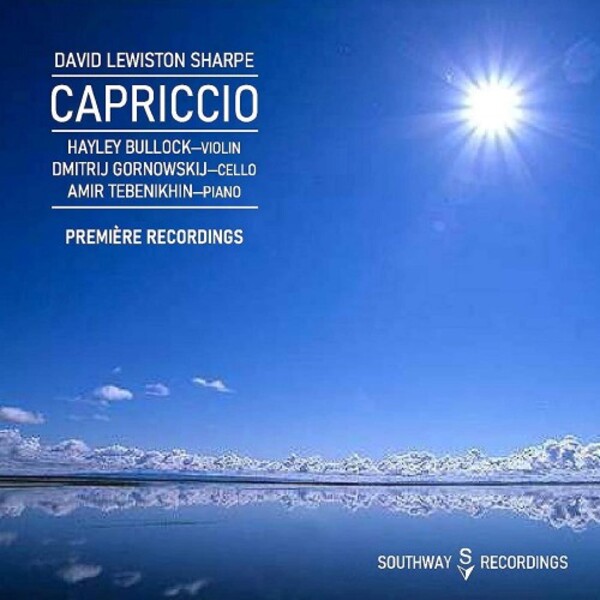 Following a debut CD in 2020, promoted on BBC Radio 3 on Essential Classics, this is the second album from British composer David Lewiston Sharpe, presenting two new duos for violin & cello, sonatas for violin & piano and cello & piano, and a new work for piano trio. Davids extensive output includes commissions from Her Majestys Chapel Royal, and the Piano Concerto premiered in 2002 by the Royal Philharmonic Orchestra and broadcast by Classic FM.

David Lewiston Sharpe was born in Oxford and studied at the Guildhall School of Music & Drama, Kings College London and the Royal Academy of Music. David is the composer of over 100 musical works embracing symphonic, chamber, solo instrumental and vocal music. His output includes commissions from Her Majestys Chapel Royal, at Hampton Court Palace, other choral works for Chichester Cathedral and St Pauls Pro-Cathedral, Valletta, Malta. Orchestral works include the Symphony of the Nile (Symphony No.2) and Song of the Sycamore (Symphony No.3); the Piano Concertos Nos. 1 and 2No.1 premiered by pianist Andrew Zolinsky with the Royal Philharmonic Orchestra under Nicholas Cleobury, broadcast by Classic FM. Other works, A Salvador Dalí Suite (Royal Academy of Music, Matthew Taylor; e2K, Robin Newton); Symphony No.1 (Trinity College of Music; Chesapeake Bay Wind Orchestra, USA). Vocal works include Litanies des petits métiers de Paris, commissioned by Nigel Foster for the London Song Festival (2015); In The Tavern Of Sweet Songs, recorded by Lucy Knight, Jeff Stewart and Nigel Foster; Twilight By The River, Through The Starry Ways, and Borrowd Light. He was on the editorial staff of The New Grove Dictionary of Music, and has published essays and journalism on music, literature, and history.

Hayley Bullock is an Australian-born violinist, and began learning violin at age 4 in Newcastle, New South Wales; she continued studies with Elizabeth Holowell (AMUS A diploma, at age 16), winning 1st place in the Warringah Eisteddfod. She was admitted to the Conservatorium High School the following year, studying with Janet Davies, and was awarded the McCaw-Bainton Entry Scholarship at the Sydney Conservatorium of Music. She has performed with Richard Tognetti, Richard Gill and Nicholas Milton and was granted the position of Principal Second Violin at the National Music Camp (Australian Youth Orchestra Program). Hayley completed her BMus with 1st Class Honours at the Australian National University. She has performed with the Canberra Symphony and Sydney Symphony orchestras. In 2015 Hayley moved to Germany to continue performing with Chamber Philharmonia Cologne (Solo & Tutti Violin, touring Germany, Spain, France and Australia); she has also appeared at prestigious venues such as the Elbphilharmonie and Berliner Philharmonie. She performs currently with the Bergische Symphoniker Orchestra; also performing and recording chamber music, and giving concerts around Düsseldorf with cellist Dmitrij Gornowskij, pianist Amir Tebenikhin and flautist Dimitre Marinkev. Hayley plays a Benjamin Banks violin, c.1786.

Dmitrij Gornowskij was born in Kazakhstan and began his studies with his father, Anatolij Gornowskij at age 7. He studied at the Almaty State Conservatory, at the Almaty State Music Academy, and with Igor Gavrish, Valentin Feigin and Maria Tschaikovskaja at the Moscow Conservatoire. He won 1st prize in the International Music Competition in Ashkhabad and was principal cellist in the Academy of Soloists. Dmitrij has appeared with the International Orchestra of Germany, Russian Chamber Philharmonic St. Petersburg, Chamber Philharmonia Cologne, Collegium Noricum Nuremberg, Filharmonia Bogata and the Symphony Orchestra of India (Soloist & Principal). He has also appeared in the Strasbourg and Edinburgh music  estivals, the Audi Classic Open Air Music Festival, the Haydn Festival in Seoul and the Interfest-Bitola Music Festival in Macedonia. Dmitrij has collaborated across a wide range of genres, including with Giora Feidman, Nigel Kennedy, Yuri Bashmet, Liana Isakadze, Dmitri Berlinsky, Sir James Galway and Mischa Maisky. In 2005 Dmitrij formed Almati Duo with the internationally-acclaimed Amir Tebenikhin; this is their fourth album collaboration. In 2010 he joined the Gershwin String Quartet, performing throughout Europe. He plays a beautiful 18th-century Italian cello, gifted by his father.